We got up early again, to go to the Tenikwa Cat sanctuary in the Crags. We went to get some breakfast and headed to get a minibus. Around 11am, we arrived at the sanctuary where we got a tour from one of the rangers, who showed us their different cats. They had cheetahs, servals, wild cats, leopards and more. It was really incredible to see these wild animals from such a close distance. As you only rarely see them in the wild, because the majority of them hunt during the night. In the morning the sky had been grey and slightly rainy, but during our tour at the sanctuary the sky cleared up and the sun came out. Which made it very hot, we decided to go back to Plettenberg Bay after our tour and agreed on going to the beach.

We had asked the manager from our backpackers, where the best beach was, and we headed off to main beach down the hill. The beach was quite crowded when we got there, but there was still place for us 2 girls. The sandy beach was very hot and we stayed about 2,5 hours, before heading back. Getting back at the Nothando backpackers, we saw that the Baz bus had been there, as the dorm had become a little bit more crowded. We started talking to some guys from Hungary and England, and decided to go out to get some pizza together.

The restaurant we went to looked kinda shabby, but the pizzas were really good, so we were satisfied. After dinner, we went to get a drink on the main road and we had a little party before going back to bed.

In the morning we woke up early, as we would go further to our next destination, which was Knysna. Here we would stay our 2 last nights of our road trip. After dressing up, we went to get some breakfast and we ended up at the food court on main road. We ordered pancakes and coffee for breakfast and it was very delicious. Later we moved ourselves to the supermarket, where we bought some water and food for lunch that afternoon. We headed back to the Nothando backpackers, where we chilled on the sofa while waiting for the Baz bus to come.

Just before the bus arrived, I noticed that my house keys weren’t in my bag, so I jumped up and ran back to the dorm, where I luckily found them underneath my pillow. When I came back the driver of the bus was waiting for us at the door, so we got in and drove away.

The drive to Knysna was only half an hour, so we were there in no time. We got dropped off at the Island Vibe backpackers in Knysna and after checking in, the manager showed us the property. This was up till now the biggest backpackers we had seen over these past weeks. He showed us our dorm and we settled in. When we were in at the reception, we were told that we could join a canoe trip along the river in the Lagoon. We wanted to go canoeing for the whole trip, so we decided to go with. We were picked up with a shuttle and drove towards the lagoon, where we would enter the river.

The guide took out the canoes and put them into the water for us, we stepped  in and off we went. We paddled for a while and came across a spot where you could go cliff jumping. Some of the people jumped off the cliff, I stayed safe in the canoe and took pictures of the people cliff diving. We continued further down the river along stunning landscapes and even spotted some Kingfishers (the Pied Kingfisher and the Malachite Kingfisher). We stopped to take a break at the side of the river near a high bridge, our guide had taken some refreshments with him, so we sat down and chatted for a while. The people who wanted could go jump off the bridge, I stayed behind safely and took pictures.

Here after we paddled back to where we had began our journey and drove back to the Island Vibe, soaked to the bone, as it had started to rain during our way back. At the backpackers, we took a nice and warm shower and headed to the city for some dinner.

The manager came with us, as he was off and knew a nice restaurant. We ate pizza yet again, chatted about our road trip and about the backpackers before heading back to the Island Vibe, where we sat down drinking and chatting with the other guests before turning in.

We got up early, as there was a lot of activity early in the morning from other guests staying in the same dorm. It didn’t mind, as the weather o utside was so much better than the day before. The sun was shining and we were happy. After dressing up, we went out to town to get some breakfast. We ended up in a small bistro named ‘Mon Petite Pain’, where we had a delicious start of the day. In the afternoon, we decided to go to the beach, but the only beach near Knysna was Buffalo Buy, so we had to arrange a shuttle to get there. We were picked up by a nice women, who drove us to the beach, where we stayed until 4pm in the afternoon.

The beach was very beautiful and as the weather was really hot, we treated ourselves with buying an ice cream. Around 4pm we drove back to Knysna, where we sat at the pool to keep cool, it was still very hot. The evening started and we decided to go out to the Waterfront in Knysna to get dinner. We had heard that the seafood at the restaurant ‘Fisherman’s Cabin’ was very good. We sat down and ordered ourselves some white wine, sushi as a starter and the valentines offer, a seafood plate for 2. The plate was full of delicious fish, calamari, line fish, prawns, mussels and we ate are tummy’s full.

Here after we met some of the other guests from the backpackers, and went for a drink or two before heading back to the Island Vibe. Arriving there, the other guests were relaxing outside and we played a few games of pool. Around 1am in the morning, I headed to the dorm, as I came there the lights were on and I noticed that 3 of our 4 bags were missing. I checked everywhere, under the bed, in the kitchen, the bathroom, but I couldn’t find them anywhere. Then I realised, somebody must have gotten into the dorm and stolen our bags. I went back to the bar, and told my friend and the manager of the backpackers. We went back to take a look together, but nothing.

After searching the whole premisses, we found 2 of the 3 missing bags behind the bushes and started looking outside the property, but we didn’t find the 1 bags still missing. The manager had called the police, but there was nothing left to do, the bag was gone.

Luckily there was nothing important in the bag, as we safely put our passports and credit cards somewhere else. After this all this drama we went to bed, shaken, but very tired.

Tuesday 15 Feb: The last leg of the trip

This was our last day of the road trip. In the afternoon we would be picked up by the Baz bus to go all the way back to Cape Town. We woke up early in the morning, after a rough and late night. We decided to go to the police station in town, but as we arrived there it was extremely busy and we figured that it wasn’t really that necessary to stand in the queue for hours for one back with nothing important in it.

So we decided to go and get some nice breakfast and we ended up at the same bistro as the day before. After finishing breakfast we visited the supermarket to get some refreshments for during the almost 10hour bus drive ahead of us. Getting back at the backpackers, we waited for the bus to come.

The Baz bus arrived around 1pm and we set off to Cape Town. On the way we watched a movie, took some naps, had a few stops to refuel and around 10pm in the evening we were finally dropped off on Long Street in Cape Town. We took a taxi to head to our student house in Bokaap, where we were welcomed by our house mates.

We shared our stories and went to bed, tired, but satisfied about our fantastic road trip along the Wild Coast, the Sunshine Coast and the Garden Route. 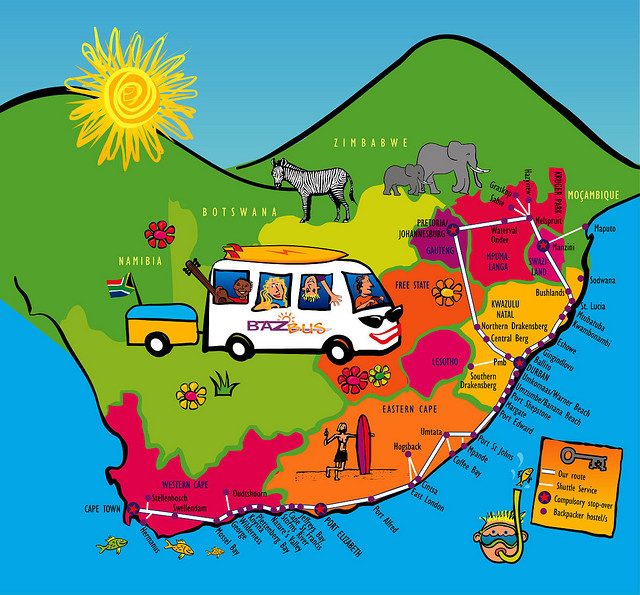 We have created a list of the best 4x4 forums in South Africa that are sure to put you in touch with some of the country's foremost 4x4 enthusiasts.

Photo by Mark Lebbell Saturday 12 Feb: The Tenikwa Cat Sanctuary We got up early again, to go to the Tenikwa Cat sanctuary in the Crags. We went to get some breakfast and headed to get a minibus. Around 11am, we arrived at the sanctuary where we got a tour from one of the rangers, […]

Photo by Mark Lebbell Saturday 12 Feb: The Tenikwa Cat Sanctuary We got up early again, to go to the Tenikwa Cat sanctuary in the Crags. We went to get some breakfast and headed to get a minibus. Around 11am, we arrived at the sanctuary where we got a tour from one of the rangers, […]