A 3-week-old white rhino calf was stuck in a V-shaped fork of a tree for eight hours after its mother was shot on a farm outside Brits in the North West Province. The calf fled from poachers after it was hit over the head with a panga.

The baby calf ran from the spot where its mother was shot in the heart and in the head, through a bush and ended up in a V-shaped fork of a tree, Hilda Fourie from Beeld newspaper reported.

As the calf tried to free itself from the tree, it dug holes in the ground as it frantically struggled. The struggle caused the baby rhino’s neck to swell, which ended up getting it even more stuck. 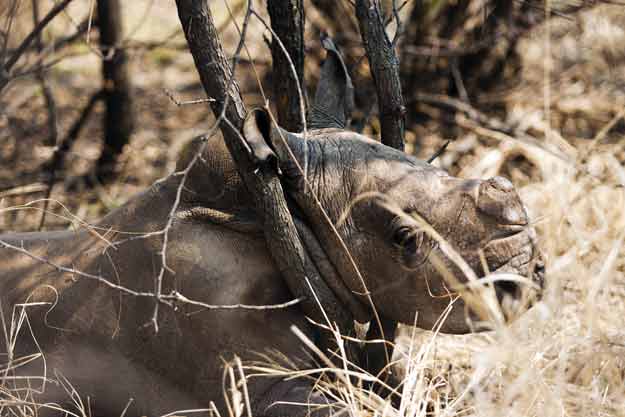 Above: A 3-week-old white rhino calf is seen stuck in the V-shaped fork of a tree on a farm outside Brits, after it fled from poachers who killed its mother. Photo by: Liza van Deventer, Beeld

When Neels van Rensburg arrived at the scene yesterday morning where his rhino ‘Alpha‘ lay dead on her back, all he could hear was the screams of the calf. “Until the veterinarian arrives, you can’t do anything about it,” he told Beeld. “All you can do is cover your ears.”

The first thing Thabazimbi veterinarian, Louis Greef, did was put cotton wool in the calf’s ears and cover its eyes, to help it relax. Then, after a half an hour attempt to free the calf, they succeeded, loading the animal onto a trailer and attaching it to a drip.

Greef told Beeld that since May, he gets a phone call about a rhino being shot every four days.

“Few people get as mad at the poachers as those who arrive at the scene. It doesn’t matter whether they (the poachers) get caught or not because they just get released again. They have to be shot.” Greef went on to say that it’s not going to stop and that outsiders don’t have a clue of what’s going on.

Van Rensburg said the rhinos are like children to him. “Other people smoke, use drugs or go fishing, but I look after rhinos. Unfortunately, I’m not allowed to cut the poachers’ nose off or shoot him dead.” 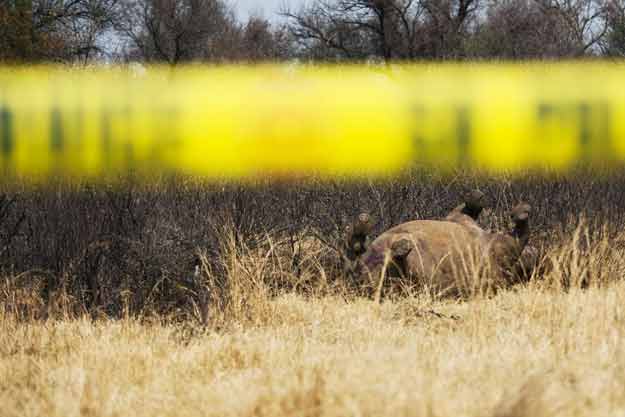 Above: The calf’s mother’s carcass is seen on its back after it was shot and killed on a farm in Assen, outside Brits. Photo by: Liza van Deventer, Beeld

Want to know what else is going on in Africa? Read here about rhino poaching and what you and I can do about it.