Mini has revealed its new Coupe model line and it promises to be the most dynamically engaging Mini road car yet.

According to wheels24, Mini’s fifth model derivative is supposed to compete with the likes of Peugeot’s RCZ and VW’s Scirocco.

Mini’s Coupe will be available in South Africa during the fourth quarter of 2011 together with other models such as Cooper, Convertible, Clubman and Countryman siblings. 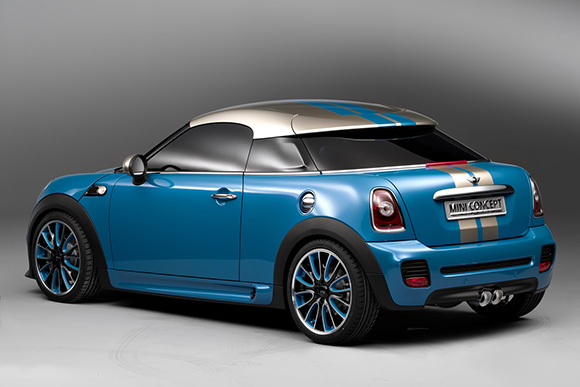 Above: Mini has revealed its new Coupe model line and it promises to be the most dynamically engaging Mini road car yet.

The Coupe is aptly named because of its coupe likeness from the brand’s hatchback heritage.

The wrap-around bubble might appear a bit strange, but there is a reason for this.  Anders Warming, Mini’s design and styling chief, has raked the Coupe’s windscreen by an extra 13-degrees compared to its Cooper range sibling.

Another interesting styling feature is an active rear spoiler which deploys from the boot lid at more than 80km/h, harnessing downforce to stabilise the rear kinematics.

Thanks to BMW’s valvetronic technology, entry-level power will be a huge bonus of a 1.6-litre petrol unit producing 90kW/160Nm.

In terms of configuration Mini Coupe is a two-seater with limited stowage space behind the seats. Coupe’s boot capacity makes up for it though, with its 280-litres space – 25 units greater than a Mini Clubman.

“Under the strange exterior, though, this top-spec, 210bhp JCW Mini Coupe drives almost indistinguishably from its hatchback cousin. Though only a two-seater – where the rear seats live in the hatch version, you’ll find a lump of plastic cladding, a parcel shelf and a big ol’ boot – the Coupe actually weighs 25kg more than the hatch, thanks to structural reinforcements to improve torsional stiffness” writes Philip.

“Despite this, and the fact that the Coupe has been dropped by an inch on its springs compared to the Mini hatch, you’d be hard-pushed to differentiate the two …”

Wheels24 reports that a Mini Connected App gives Apple iPhone operating Mini Coupe owners the ability to reveive Facebook and Twitter posts, display them on the on-board monitor and even have them read out loud by the optional Mini Connected voice output function. Among the other functions unique in this segment are web radio, Google’s Local Search and Send to Car services, plus reception of user-definable RSS news feeds.

Test drive a Mini Coupe now and see if you agree with Philip. Who knows, the two seather Mini Coupe might be just the thing for you and you’ll really really like it.

Drive South Africa will assist you when hiring a luxury car.