It all started with a text from a friend of mine here in South Africa, asking me if I had any guts (and money) or was I a nitwit. After reading this message I was confused and intrigued. What did he want from me? I soon found out he was talking about cage diving with sharks.

Cage diving with sharks?! At first, I wasn’t really sure I was up for it. I never do crazy things like this voluntarily, especially when it involves a wild creature like the shark, but something about it really enchanted me. I told him I would sleep on it and tell him the following day what I had decided. 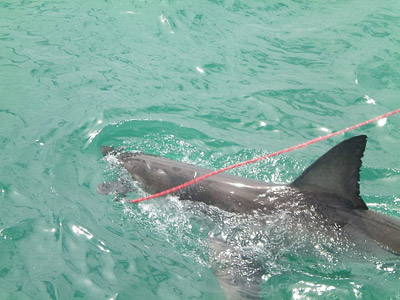 The next morning when I woke up, I still had this tempting feeling, so I decided that I just had to go shark cage diving. My friend was very thrilled to hear that I wanted to come with him, now we could make some plans.

We booked a shark dive trip for five people (some of my other friends wanted to join us as well) on Friday the 24th of September. We were all of that day since it was National Heritage Day, also known as National Braai Day, and a public holiday in South Africa, making it very convenient for us. After we booked, we waited to hear from the company what time we had to be there, our arrival dependant on the currents of the ocean.

We were notified to be in Gansbaai at 10.00 o’clock in the morning on Friday the 24th of September. It was a two-hour car drive, so we left early in the morning at 07.45am from Cape Town to Gansbaai. During the car drive over the highway through the Overberg Mountains, passing the Whale Festival town of Hermanus and other places, we started to feel very excited and nervous. We were actually going to do the shark cage diving!

When we arrived at the Great White Shark Tours Company in Gansbaai, we had a warm welcome with a nice breakfast with coffee and tea, croissants, yoghurt and baby bananas. The sun was out that day, so we sat ourselves down on the veranda, ate some breakfast, paid the ticket and enjoyed the sun.

Around a quarter to eleven, we had a short briefing about what we were going to do that day. The skipper told us that we were going to a reef just outside the bay; this reef was known as a good spot for sharks. So a good place for cage diving. He also told us what to do, what not to do and the safety procedures just in case, though he ensured us that he would get us all safely back to the harbour in one piece. 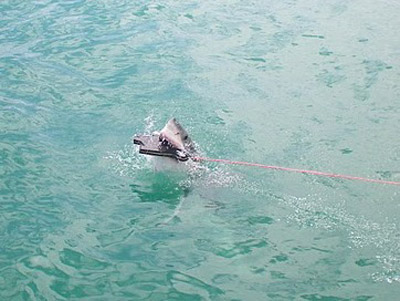 We took all our stuff and headed towards the boat and seated ourselves on top where we would have a good view of the water. The boat ride took about ten to fifteen minutes and the waves were pretty high. We had almost arrived at the cage diving spot when we saw the first shark swimming by. It was amazing. He was about 2 meters long and just minding his own business. Shortly after this shark we anchored at the diving spot and let down the cage into the water.

The skipper told us that they were going to lure the sharks with a mixture of some fish oil and bits of tuna. It would take about 20 to 40 minutes for the sharks to arrive. So we waited while the first eight persons to enter the cage were changing into their wetsuits. Suddenly we heard someone screaming and pointing toward the water. There it was; the Great White Shark. This was still a small one, about 2 meters long, swimming just a few meters away.

The crew put the decoy in the water, while the first divers stepped into the water. They still needed some divers for the next round and we decided to go next. We went down to the deck and got ourselves some wetsuits, diving shoes and masks. While putting my wetsuit on, I started to feel nauseous. At first, I thought this was because I was about to step into the water with sharks, but later it was because I was feeling seasick. My friends stepped into the cage first, and I followed later. I jumped into the water and suddenly couldn’t breathe anymore. My suit was too tight, so I opened the zipper quickly and tried to breathe normally again and become aware of where I was.

Holding on to the cage trying to breathe and keep an eye on the shark, we listened to the crew who were shouting directions of the sharks’ whereabouts. Every time it came close, we took a deep breath and went down, eyes open to watch the shark. The first time I saw the shark while cage diving I could only vaguely make it out, but the second time he was facing the cage sideways and swimming by about 15cm away from the cage. It was truly amazing. Seeing such a big fish from this close!

I spent about 15 minutes in the water and once out, dressed immediately to keep myself from getting too cold. Though I was wearing jeans, undershirt, long-sleeve shirt, fleece sweater, vest and rain jacket, socks and shoes I was still shivering. The water was really cold and I think because I was feeling seasick I could not warm myself up again. In the meantime, another Great White shark had arrived and this one was about five meters long, a very big one!

After some time and many shark attacks on the penguin-shaped-decoy later, we packed our stuff and went back towards the harbour. On our way back we came by a whale that was playing with the waves. A real treat after the adventure we already had. When we arrived back into the harbour, I started to feel a bit better. And the minute I stepped on to the dock, my seasickness was gone. As if I never had been sick at all. 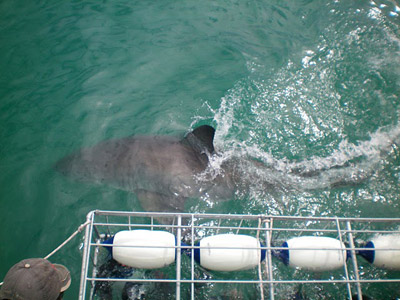 Back at the house, we warmed up with some hot vegetable soup, coffee, tea and delicious coconut/chocolate cookies (I ate a lot, they were scrumptious!). The crew had made a DVD from our shark dive which we also bought to have as a memory of this brilliant day. In the car back, we talked about our experiences on the boat and in the water.

Despite the seasickness, I truly had a wonderful day and I am glad that I joined my friend to go cage diving with sharks. Truly a once in a lifetime experience!