Cape to Cairo: On the road at last

To kill time last week and to generally keep on schedule with Tin Can’s arrival being 3 weeks late, we decided to fly return from Cape Town to Johannesburg to see Marianne’s other sister Tineke and brother in law Dave. They were most hospitable and Mango Airlines return fare is only USD$150, so this avoided having to go to Joburg, which is in Gauteng, later in the trip.

The absolute highlight of the week was a 4-hour bicycle tour through the huge township of Soweto (population 5M) with Lebo’s Backpackers and Bicycle Tours. This cost was USD$60 each and was well worth the money! The guide “Philli” was great. We drank local millet beer in a shebeen, had a local lunch of “pap” and calf’s cheeks and saw where the 1976 school uprisings started which spelt the beginning of the end of Apartheid.

Nelson Mandela’s old house was nearby as is the house Desmond Tutu lives at times. Soweto surprised us with its general progression and neatness. Certainly a step up from the shantytowns of Kayelitsha near Cape Town -to which Stan and Hugo delivered some furniture in the week before for the local painter Eric. There people certainly survive on subsistence wages and have very little.

Finally and only 3 weeks late the Mediterranean Shipping Company managed to get Tin Can (our trusty 4×4) to Cape Town on 21st February! General congestion in the ports of Durban and Port Elizabeth were blamed, but who knows the reasons? Things go according to Africa time now.

The process of getting her through the port and Customs went smoothly enough – although the whole process took 4 hours with  knows how many documents to be stamped and bills paid to Transnet, MSC Shipping, SA Customs, Port of Cape Town and Sam the depot foreman before Stan was able to kiss her “hello”! At USD$1,300 for the lot, the whole thing cost somewhat more than we were expecting, but seeing as Tin Can came out without a scratch and started the first time, we paid uncomplainingly. However, the charges to off load were higher than to load the vehicle in OZ, which seemed surprising. 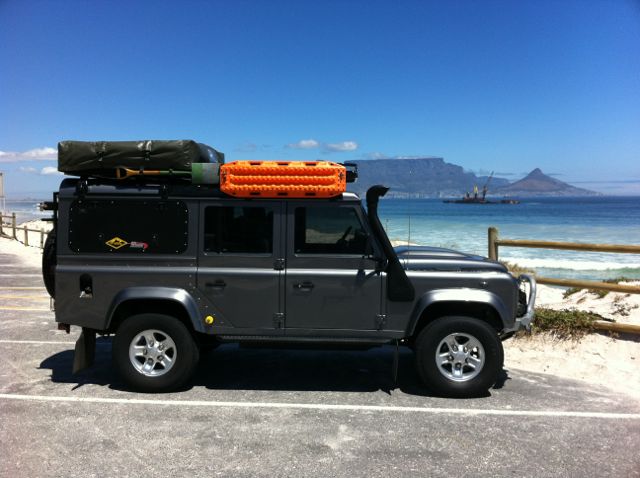 At least now final packing of the last minute supplies accumulated in Cape Town over the past 3 weeks has occurred, we have said a fond farewell to Marianne’s sister and brother in law who have been so kind putting us up for longer than expected and hit the road.

First stop has been two nights at the quite remote De Hoop Nature Reserve near Swellendam. The camping here is lovely – with a good site near the vlei (salt water lagoon) and plenty of bontebok, mountain zebra and baboons wandering through the campsite. Masses of bird life with beautiful little Tarentaal (quail) and guinea fowl scuttling around the campsite taking bread out of your hand.  The reserve holds 3,000 different species of birds and 30,000 live on the vlei. A bird watchers paradise! The afternoon was spent watching little honey eaters dozens of different birds come down to drink at the dripping tap on our campsite. The re- acquaintance with African wild life begins… 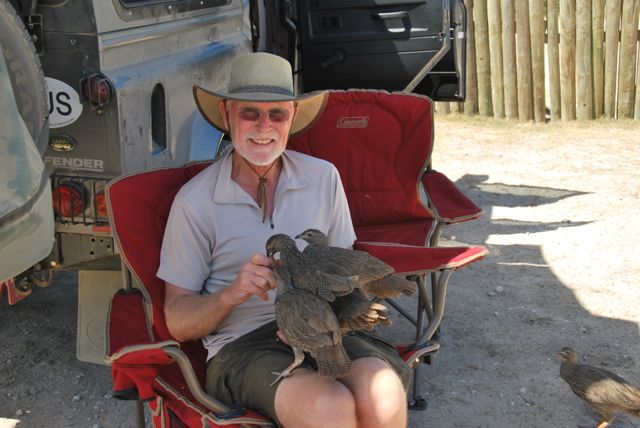 De Hoop also has the world’s second largest sand dune and miles of beaches and during the winter months, people come to watch southern right whales cruise up the coast as well as schools of great white sharks from the top of the dune. No whales now in February but tomorrow once we have broken camp we intent to go check out the massive dunes and try some sand surfing! 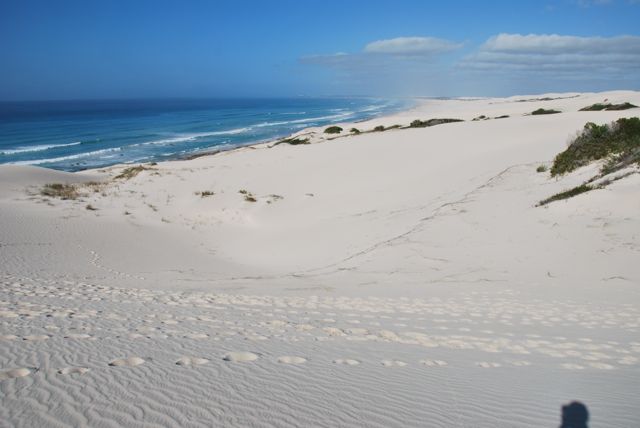 Still, as to be expected at the start of any expedition, gaps in planning and execution have occurred! Started off with general uncertainty yesterday about the closing time of the gate at De Hoop leading to us arriving at the gate at 6.30pm after a late start from Cape Town only to find that closing time was 6.00pm!

Back we go along 65km of rough gravel road back to the town of Swellendam (the 3rd oldest town in South Africa dating back to 1745 and with beautiful old buildings and churches)- where we ended up in a B&B as it was now 9.00pm and nobody felt like finding a campsite. Back 65 kms to De Hoop in the morning and Tin Can has now done nearly 200kms of dirt road already and like any true Landrover Defender is dusty as both inside and out!

Second disaster was Stan spilling a jug of water into our 2400 watt 12/240 volt inverter, which runs both the jug and more importantly, powers the various phone and battery chargers to keep communications going. The inverter didn’t like it at all and basically exploded with smoke pouring out and plenty of sparks! Most of the afternoon was spent pulling it apart, but she’s cactus! A new one at probable great expense will have to found? Damn…

Feeling a bit jealous of Stan and Marianne’s trip? Why not create your own little adventure and hire a 4×4. 4×4 hire in South Africa is quick and hassle-free. Most travelers opt for car hire to accommodate their travel plans.