The Caprivi Strip is a stretch of lush bush, complimented by a labyrinth of channels and swamps where the rivers of the Kwando and Okavango create their deltas, providing thriving plains to a host of wildlife. This Namibian Caprivi Region is where my wife, Marianne and I headed to next on our self-drive overland trip in our trusty Land Rover Defender. Car rental Namibia which help immensely with getting you from A to B.

In western Namibia, you have Divundu on the Okavango, which is where the Caprivi Strip starts. It is also the place where one can enter Bwabwata National Park from its western end. Divundu is home to hordes of campsites and lodges along the west bank of the Okavango. Whatever your budget, there’s a place to stay on the river bank. We stayed at a lovely lodge called Nunda Riverside Lodge. We found the lodge with these GPS coordinates: S18*06”357’ E21*35”640’.  We had originally planned to stay at Ngepi Lodge but with the Okavango River recently flooding, Ngepi had become an island with about 200m of 1m deep water which needed to be crossed in order to get to it. Without a snorkel, we weren’t going to even think about attempting to take our Land Rover Defender across it. 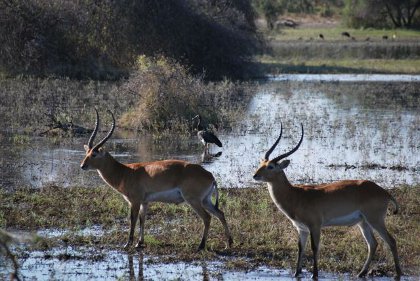 Above: I captured a shot of a couple red lechwe.

From our lodge, the small Mahango Game Reserve was 15 km down the road and is found at S18*10”752’ E21*40”846’. The reserve may be small but the 15 km riverside drive makes for a scenic, 4×4, nature drive, with an opportunity to spot wildlife along the way. This drive is one of Marianne and my favourites and we have enjoyed every minute of the surrounds each of the 3 times we’ve done it. The reserve is thriving with wildlife. From our Land Rover Defender, we’ve spotted everything from buffalo to elephant, giraffe to hippos, after just a few kilometres of entering the reserve. Of course, you also have the ‘usual’ game around, like kudu, impala, puka, lechwe, and the rare Roan antelope.

Mahango’s entrance fee isn’t bad at all, standing at about USD$12, which is far cheaper than Etosha National Park.

Even though Mahango Game Reserve is extremely beautiful, with its stretch of lodges and the Popa Rapids on the Okavango, I must say that I loved Bwabwata East National Park even more. 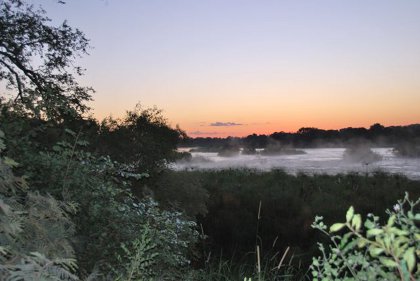 Above: Popa Rapids by Stan Rogers

Within the Bwabwata East National Park there is a great campsite run by the local community called Namwa Camp which can be found at the GPS co-ordinates: S17*52”621’ E 23*19”080’. You arrive at the site after a thrilling, 15 km 4X4 route. The challenging drive takes you through sandy terrain and high elephant grass. The camp lies near a bend in the Kwando River called The Horseshoe. It is here that many elephant calls home. A gorgeous place indeed.

In the national park, you experience a whole other level of solitude. It isn’t often that you visit a national park and it feels like you’re the only paying customer there. It’s like having your own personal park… and for only USD$25, which includes your entrance and camping fee, it’s an unbelievable bargain.

At our Namwa campsite we settled down and cast a line into the Kwando River – the elusive Tiger Fish live in these waters and we were intent on catching one. Suddenly a herd of five elephants came trundling through the bush, a small calf following alongside! The elephants casually made their way through our campsite, feeding on the occasional Mopani tree along the way. Marianne got the fright of her life when she noticed how close she was to a fairly small bull. Small as in approximately 4 tons! Etching backwards toward the Land Rover Defender’s cab Marianne nervously recited out loud a list of warnings about elephants with calves she’d read. A humorous wildlife encounter in retrospect. 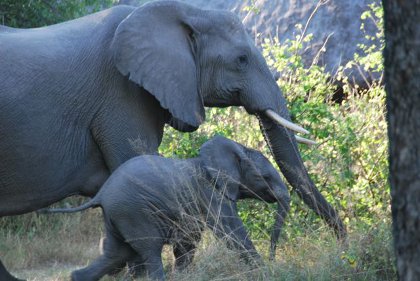 Above: Our encounter with elephants

Another special wildlife encounter at Namwa Camp was when I accidentally surprised a troop of about 50 baboons in a large Camelthorn tree. It was early in the morning and I had been for a walk round the bend. The troop fell from the tree like hail from the sky. The guardian males barked at me while the mother baboons and their babies scampered away.

After two blissful days at Namwa, within Bwabwata East National Park we got back on the road, crossing the Kwando River and driving our trusty Land Rover Defender through the small Kongola settlement. Here we replenished our supplies and spent the night at Camp Kwando. The camp is beautiful with its green lawns and sparkling pools on the banks of the Kwando River.

At this point, we weren’t sure where we would head off to next, but I suppose that is the beauty of a 4×4 self-drive trip overlanding Africa.