Did you know that today is International Ozone Day?

16 September is Ozone Day and on this day you should take some time to remind those around you of the need to protect this valuable shield that safeguards our planet.

On 19 December 1994, the United Nations General Assembly proclaimed 16 September the International Day for the Preservation of the Ozone Layer, commemorating the date, in 1987, on which, according to *UNEP, the Montreal Protocol on Substances that Deplete the Ozone Layer was signed. 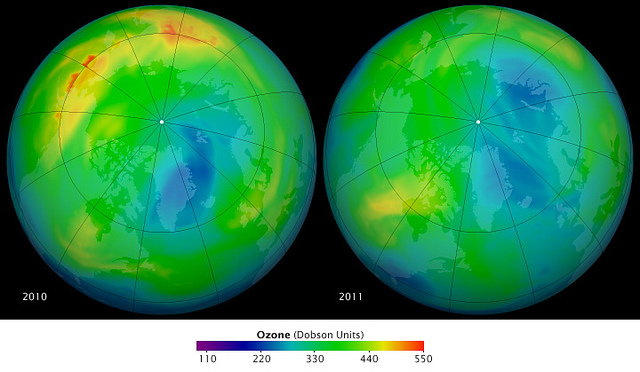 Above: These maps of ozone concentrations over the Arctic come from the Ozone Monitoring Instrument (OMI) on NASA’s Aura satellite. The left image shows March 19, 2010, and the right shows the same date in 2011. March 2010 had relatively high ozone, while March 2011 has low levels. What these readings mean for the long-term is that the recovery from human-induced ozone depletion is an uneven climb. Photo by: NASA Goddard Photo and Video

The ozone layer, the invisible shield that protects all living things from the sun’s harmful ultraviolet rays, started its decline because of ozone-depleting substances used around the world. By signing the Protocol, governments set a precedent for further international cooperation in dealing with a global environmental threat by phasing out ozone-depleting chemicals. According to Cape Town Green Map, South Africa acceded to the Protocol in 1990.

Why not do one thing today that will make those around you aware of how important it is to protect the ozone layer?

10 Tips to save the ozone layer

Everyone should be responsible for the use and abuse of certain products that have a negative effect on nature. It seems that chlorofluorocarbon (CFC)
causes the most damage, but there are other products and habits that also have a negative impact.

As Mahatma Gandhi once said: be the change you want to see. By making small changes in your everyday life, you can make a difference.

Another way to make a difference when travelling is to rent a vehicle with low Co2 emissions. Opt for a smaller vehicle with less impact on the environment. Car rental South Africa can help with that.