On 22 June the start signal for the first Put Foot Rally was given. Seven checkpoints, seven countries and seven parties over 17 days, these teams journeyed to raise funds for school shoes and to experience Africa, unfiltered.

It’s a great opportunity to discover Africa’s jewels in a short period of time if you are not afraid of getting squashed by an elephant or washed away in the Zambezi River. According to Brainstorm Magazine, the Put Foot Rally is an event with an emphasis on all things social: a social entrepreneurial venture that proved just how important it is to be able to effectively leverage online social capital when the goal is a social investment in Africa. All about busting myths and blazing trails, the Put Foot Rally sought to show people that a 4×4 and a massive travel budget aren’t requirements for the ultimate road trip.

Daryn Hillhouse of Mountainshak Adventures, the ingenious organisers of the rally, says the focus is on the journey and not on how quickly you get from one checkpoint to the next. “It’s all about the experience and, most importantly, getting people into Africa,” he told aboutime.co.za. “We spend so much time trying to justify to people why we should be called ‘Africans’, yet the majority of South Africans have never been to our neighbouring countries… That is hardly ‘African’,” he adds. “We’ve planned the route and distances in such a way that you’re not simply charging through Africa to get from one checkpoint to the next,” says Daryn. “Each checkpoint is set up in a location that highlights the best that each country has to offer, and there will be more than sufficient time to explore these sights as well.”

With 25 crews, 100 people in total, the adventure started in South Africa, Johannesburg and Cape Town. All rally crews gathered there and headed off to Etosha National Park, Namibia, where the first checkpoint was located. Then the journey continued to the beautiful Okavango Delta, Botswana. The next stop was Victoria Falls in Zambia. From where the crews drive further to Lake Malawi and Inhambane, Mozambique, until the crews passed the finish line in the Kingdom of Swaziland.
Each leg has a checkpoint, where crews can freshen up, exchange their adventurous stories and party till the sun comes up. 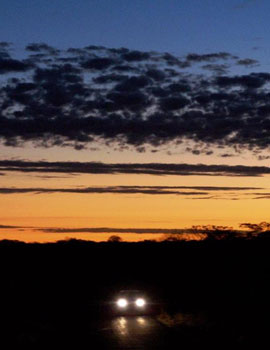 The Next Put Foot Rally

Things to keep in mind for the next Put Foot Rally:

Important to know is that every crew is responsible for their own fate. Don’t rely on a garage, if you are in the middle of the desert and your car breaks down. Don’t expect a SWAT team to your rescue if you get into a bloody fight with the customs officers, because you have a baby lion in your trunk.  You are responsible for your own safety, well-being and fun!

Although this rally leads you through 7 countries in only 17 days, there is no need to rush! Enjoy!
This rally is not a race! There is no prize money involved, so take the time to enjoy the stunning flora and fauna to the max. What you do between start and finish is your choice. 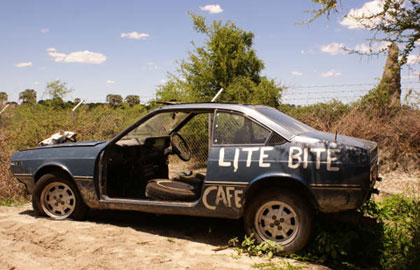 You are still interested? Time to talk about the vehicles now!
About 95% of the roads are easily accessible and for the remaining 5% there are alternative routes. Therefore it is your decision whether you want to drive a 4×4, a sports car, a camper, a tractor, a minivan or a monster truck. The only rule is a crew must have one vehicle or two motorbikes. Also, the crew size is up to you, as long as you can still legally justify it.

Be part of next year’s expedition and sign up for the Put Foot Rally now.