The name Victoria Falls by no means describes what one can expect from the mystical appearance of these gigantic waterfalls. The Makolo people, on the other hand, made a better effort by naming the falls: Mosi-o-Tunya, which literally translated means “The Smoke That Thunders”.

If you are interested in going on a 4×4 adventure here, but find yourself in need of a vehicle, you might want to consider 4×4 hire Zambia to find the perfect vehicle for your travel needs.

When reaching Victoria Falls, one will descry a truly impressive image. The Zambezi quietly winds its way over the flat Savannah, peppered with small tree-covered islands and unique biodiversity.

Nothing in this peaceful environment would indicate such a massive emergence that is Mosi-o-Tunya. No mountains, no escarpments, no valleys, and yet there it is: “The Smoke That Thunders”. The Zambezi seems to magically disappear in a gigantic chasm, known as the Victoria Falls. 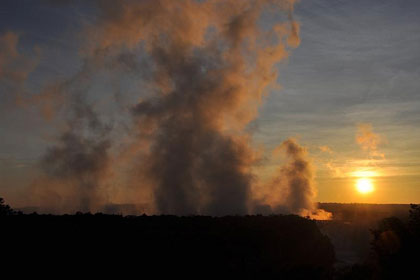 Although there are not many indicators for such a wonder of nature, a fact is that it is there.

The reason for Victoria Falls’ existence is due to the fact that the Zambezi River flows over soft sandstone, which eventually caves in to form the massive waterfall and the gorges that make up the Victoria Falls.

An important fact about Victoria Falls is its locality, nestled right at the border between Zambia and Zimbabwe. 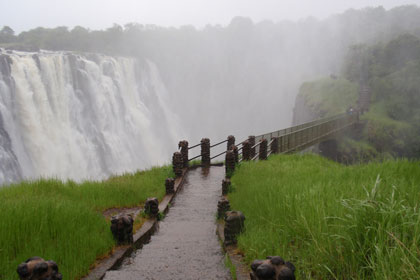 Once David Livingstone had named the falls, the island on which he stood to see them for the first time, got named after him as well, namely: Livingstone Island. This island is located in the middle of the curtain on the Zambian side. The other option which allows you to see the Victoria Falls in its full beauty is Boaruka Island, located at the western part of the curtain, also on the Zambian side.

One of these islands should definitely be on your list of things to do when you go to check out Victoria Falls. However, do be aware that there are optimal seasons for travel in Africa; meaning that some months see the Zambezi carry more water than others. Between the months of February to May, more water slops over than the rest of the year, making this the opportune time to visit the falls.

The only outlet for all this water is the First Gorge, which boasts a width of 110 metres, it is here where every single drop that falls down the massive falls will have to pass.  During the dry season, it becomes quite possible, however not necessarily safe, to walk along to the bottom of the First Gorge. 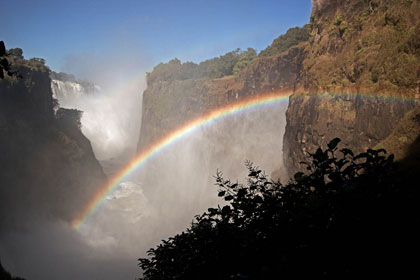 No matter which season you plan on visiting or on which side of the falls you plan on standing, the Victoria Falls will always present itself as a true wonder of nature.

Once you have discovered this wonderful, you can then move on and start exploring the Victoria Falls National Park and view the vast game or attend some of the other countless activities offered at Victoria Falls.

If you plan on going on an adventure to this majestic location from South Africa, you might want to use a vehicle to get there. Car rental South Africa would be a great place to start looking for the best wheels to get you there.