On Saturday 12 February Cape Town’s Artscape Theatre played host to the exciting second edition of the Fascinating Expedition and Adventure Talks (FEAT). The evening event brought together South Africa’s top adventurers and explorers to share their enthralling accounts of human endurance and achievement.

This year’s speaker line up once again inspired the imagination and kept the packed auditorium enthralled with their impressive accounts of monstrous expeditions as well as some of their more humorous and disgusting experiences along the way.

Adventure racer Tatum Prins’s description of the Stinging Trees of Australia with poisonous hairs which had been removed with a mixture of hydrochloric acid and water after they caused her lymph-nodes to swell into the size of golf balls during a race elicited a loud pained reaction from the crowd.

The dynamic, fast-paced and captivating presentations covered a variety of outdoor-themed sports and adventure interests offering up great insight into what drives the ordinary South African to achieve extraordinary things.

South African sailor and high mountaineer Monde Sithole believes “when you are doing what you love passionately you have a deeper reservoir to draw from and so push yourself further beyond previously known expectations”.  Monde (20), who spent 5 months sailing a tall ship from Cape to Bermuda, is on a mission to climb up the world,s 7 highest summits and conquer the poles.

Nick Bennet, 26, who recently spent a month living on a desert island survivor-style in the Life to the Limit Endurance Challenge agrees and says isolation is good for the soul, it’s about “when you wake up at 5:30 in the morning and swim out to watch the sunrise and think to yourself there is not a person on this planet I would swap places with”.

Rowing across the Atlantic

The final speaker of the evening, endurance adventurer and Atlantic rower Peter van Kets, spoke to the mental and emotional hardship of spending months alone at sea. The East London resident is the only African to have rowed the Atlantic Ocean solo and unsupported, finishing the 2010 Woodvale Atlantic Rowing challenge in 76 days. 2010 was van Kets second Woodvale Challenger after winning the pairs division in the 2007/8 race with friend Bill Godfrey. 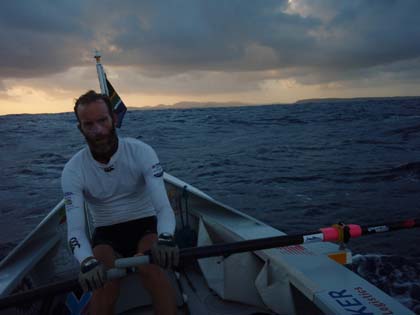 2012 will see van Kets will be embarking on his next expedition, the Capri-X an epic 37 500 km circumnavigation across the globe along with the Tropic of Capricorn. The gruelling challenge will take van Ketz across 3 Oceans, 4 continents and through 4 deserts in the hope of raising awareness around global warming.

Throughout the evening’s entertaining and exciting regales of exploration, the message that flowed through clearly was the importance of “challenging yourself” embodied in  MC, Max Cluer’s, question “how you do you live? What pushes your buttons and keeps you from doing what these guys do?”

If you want to attend the event, but don’t have transport, have a look at car hire South Africa to find the perfect vehicle for your needs.