Watch the Youtube Video to see Lucy the giraffe getting rescued from the swimming pool. 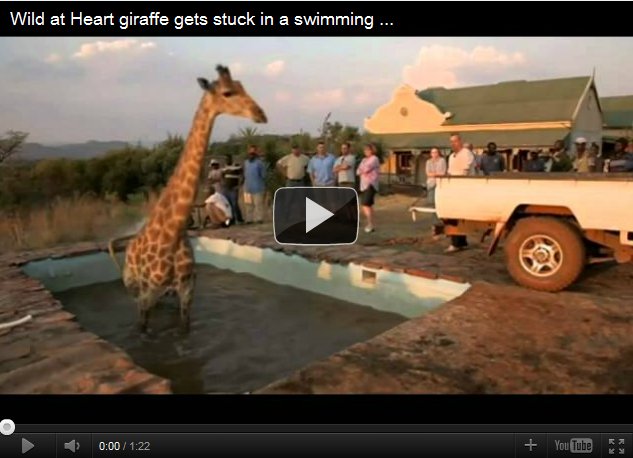 A pregnant giraffe in the Leopard’s Den game reserve in South Africa broke onto television series Wild at Heart in Africa’s set and accidentally fallen into the swimming pool. The 14 months pregnant giraffe, named ‘Lucy’, managed to squeeze through a fence around the set situated in the Glen Afric game sanctuary.

Producer Adam Friedlander says he is not sure how the giraffe landed up in the pool, but he guesses that she may have been drinking from it, and with her head being too low, became disorientated and fell in.

The crew first drained the pool with the idea of building steps out of sandbags hoping she would walk out of the empty pool. They abandoned the idea out of concern that the animal would slip. The Fire Brigade was called out to help with the situation and decided to dig a trench at one end of the pool and tempt the giraffe out with some food.

After three hours Lucy was able to safely climb out of the pool unscathed.