Towering for 3004 metres, the Cathedral Peak is the highest free standing mountain in the Drakensberg. #TrekSouthAfrica’s lead photographer Rudolph de Girardier spent the day hiking this giant. Here’s his story.

If you are looking to go on a adventure in the area, you might want to look into having some wheels to get around. Car hire Durban would be the best place to start looking. 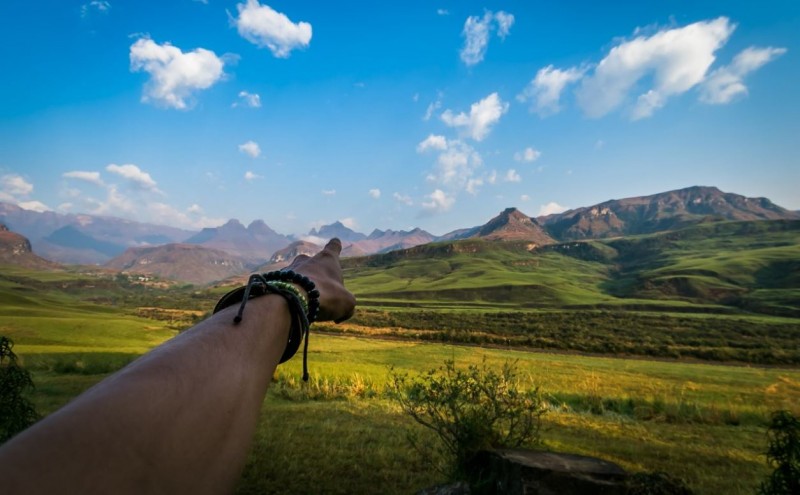 After much rain, and even some hail, in the previous few days, we woke up on D-day at 05:45 am. Our eyes opened to admire beautiful blue skies, sparse and gentle clouds rolling over the peaks surrounding Didima, our campsite. Today, we would walk on Cathedral Peak, pointed out in the above image.

After meeting our guide, Zama, and our two trekking companions, Freedom and Prince, we drove out to the parking lot, placed next to the golf course and the start of the trail. Cathedral Peak was awaiting our footprints, and we were determined to summit this massive peak. The summit standing 3004 meters tall, the hike would involve 1800 metres of elevation, and some technical challenges near its top.

We were unafraid: our minds were strong, our bodies well rested. Before the first mile, we could not resist admiring the stunning views nature offered us. 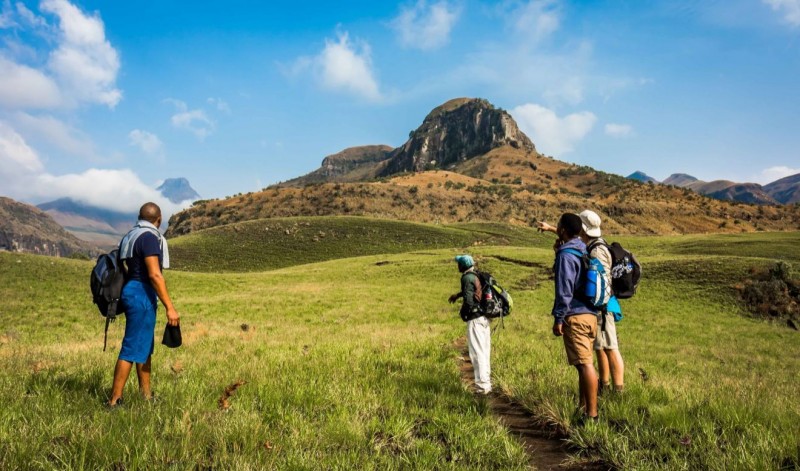 The clouds kept rolling in, between the peaks. Unbelievable views. We were suspicious of the great weather’s consistency. The last thing one would want, on such a trail, is to receive an unwanted shower, and to have to walk for hours in soaked clothes. The clouds kept their pristine whiteness, giving us courage. The rain’s threats could not be listened to, so we continued, one step at a time, beads of sweat starting to form on our foreheads.

After two hours of walking, we took our first break, our first victory. Our progression was consistent. Prince and Freedom started to feel the mountain in their legs. Believe it or not: this mountain would be their first summit, their first hike. What a first! Hard indeed, but one of the most beautiful I have completed.

Zama’s great energy kept them going, as he guided us through the narrowing paths that were, slowly but surely, taking us to the summit.

We crossed rivers, we climbed boulders, and on this particular ridge, seen above, we could start admiring our progress, our elevation, and the nearing top. As we would reach the rocks in front of us, we have to start being more attentive to the technical aspects of the hike: the slopes would get steeper, and the climbing holds sparser.

We called for a rejuvenating break, before starting the tougher climb. Much appreciated by our friends and trekking companions whose energy was dropping.

The next phase of the climb became serious. The views became mind-dazzling. Our legs were shaking. Freedom, Prince and Justin opted to wait for us, at a lower point, as we attempted to summit the peak. Our group dropped from eight to five hikers. We had to keep our minds strong, and focused. Ignore the muscle pain, and look up at our goal.

Our first major obstacle was a steep cliff face. We had to entrust the value of our lives to a thin rope. Under the encouraging directives of our guide, we progressed on the rock wall, slowly, and managed to conquer it, not without scare.

As we approached the second obstacle, a much steeper cliff face, having to be conquered with the same rope quality, we had to reconsider the feasibility of summiting. Time was passing, our progress was slow and ending the hike after dark would imply some dangers we could not afford to expose ourselves to.

A vote ensued, in which we had to shut down our personal thrive to success, and consider the situation critically. When we turned back, less than a hundred vertical meters from the top, my heart shattered. It was the right choice, but failing to summit broke down my mood. The closest comparison would be that of an unconquered love. Having flirted with the slopes without reaching the top felt like a dear loss. 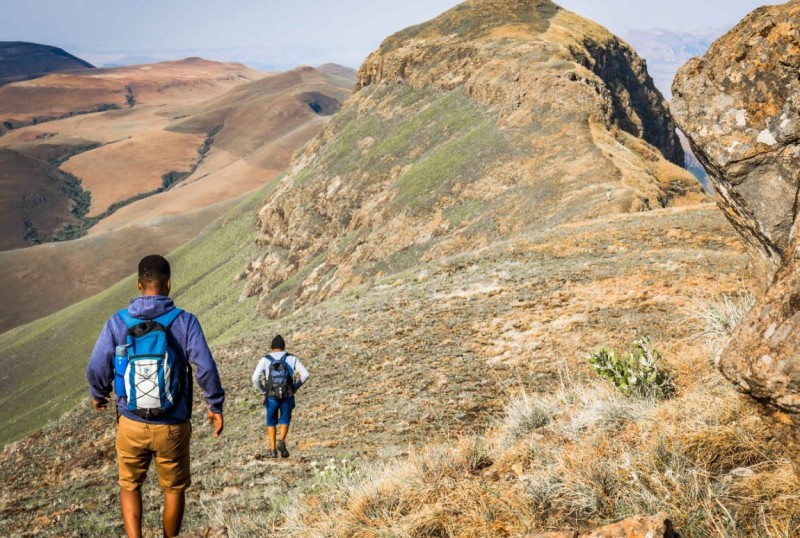 Turning back so close to the goal did not mean turning back from more spectacular views. Far from it. As we walked back in the direction of the parking lot, via a different path, our eyes kept being filled with sheer natural beauty. Falcons flew above our heads, and, having rejoined with the rest of the team and rested around a well-deserved lunch, we walked with a new strength. The feeling of failure receded as the discovery of this magical natural environment pursued.

Anywhere we stood, we could not be insensible to the grandiose views. 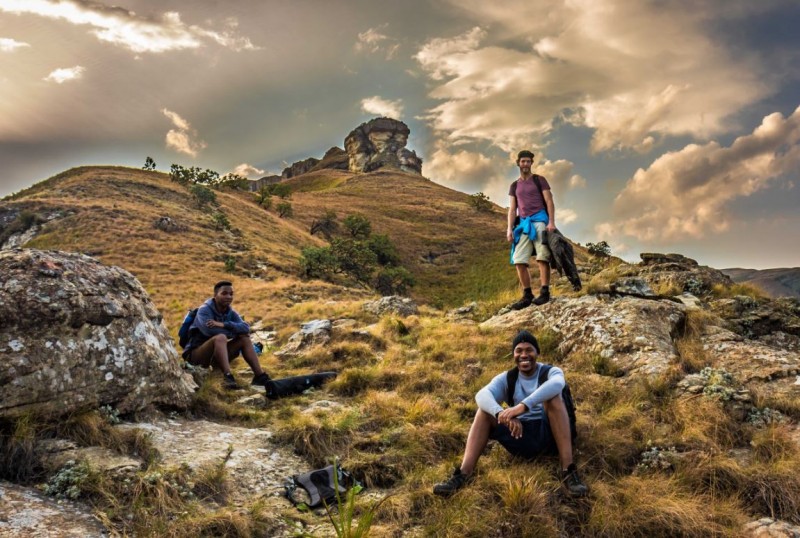 The down slopes were, although concave, unbelievably steep. The perspective of the distance can be observed in the above image. One meter forward equated a meter and a half down. We had to take careful steps. A grand adventure.

Hour by hour, the sun was setting. The clouds started glowing. Our smiles started stretching. Nearing nine hours of active walking with heavy carriages, we were finally reaching the day’s finale.  Our legs were weak, but powered with the ambition that the completion of effort provides. 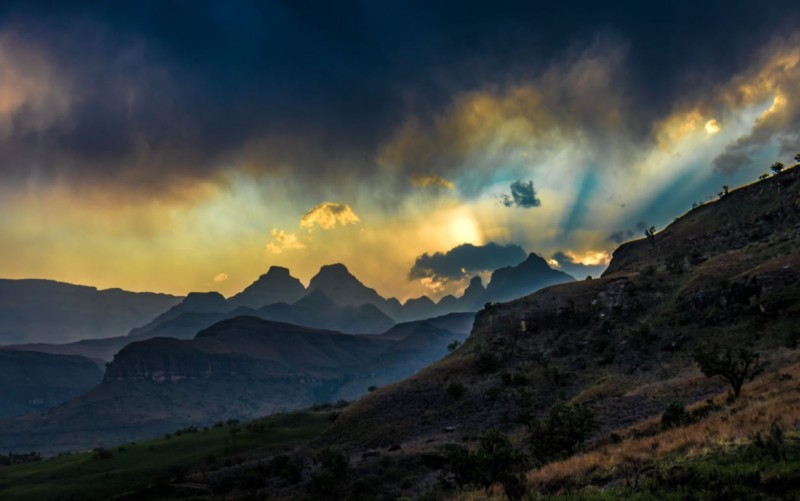 The last lights were shining through the thickening clouds as we reached the bottom of the slopes. We gave each other tired high-fives, which meant far more than a hundred energetic ones. Our eyes were filled with beauty, our bodies full of nature’s frequency. We were physically burned out, in an incredibly elated way.

As an experienced hiker, I feel confident in recommending Cathedral Peak as one of the best and most scenic day-hike one can complete.