Hmm… I’m not entirely certain what that’s supposed to mean. I personally don’t think driving a BMW is the worst experience I’ve ever had automotively speaking. In fact driving a BMW is jolly good most of the time, often becoming a kind of telepathic thing where you and the vehicle become one. Sounds clichéd I know, but BMW owners will know what I’m on about.

Infiniti also encourages us to think that Infiniti aren’t in direct competition with the only other Japanese luxury brand in South Africa: Lexus. A statement made so emphatically, one can’t help but think the polar opposite. But it’s fair to say there is inevitable scepticism from those within the local motoring industry, some commenting Infiniti will struggle to sustain growth in a truncated luxury market, especially against established, high class German competitors.

Cadillac is an example of a luxury only, ‘American derived’ brand introduced by General Motors that had a brief tenure on the scene before retiring shyly with its square tailpipes between its legs. Perhaps Infiniti will be different? Perhaps thinking in terms of curves rather than straight lines is enough?

Born as the luxury car brand of Nissan out of the USA in 1989, Infiniti is 23 years old. That’s young – you probably have kids older than that. They have two dealerships in Hatfield and Melrose, Gauteng, at the moment but hope to have Cape Town and Durban dealerships up and running by the end of the year. Their weapons to achieve market dominance are represented by five models: the ‘G’ Coupe and ‘G’ Cabriolet, the ‘M’ Sedan, the ‘EX’ cross over type vehicle, and the finally the ‘FX’ SUV, which we were invited to drive in a wet and soggy Cape Town.

What about the meat and veg underneath these curved Infiniti’s?

There are a lot of cars and a lot of models to get through so let’s waste no more time:

The Infiniti G37 Coupe and Cabriolet: 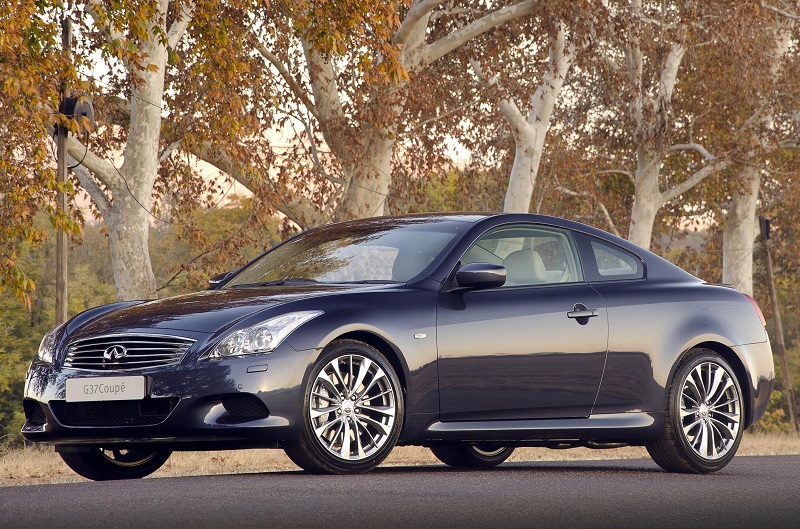 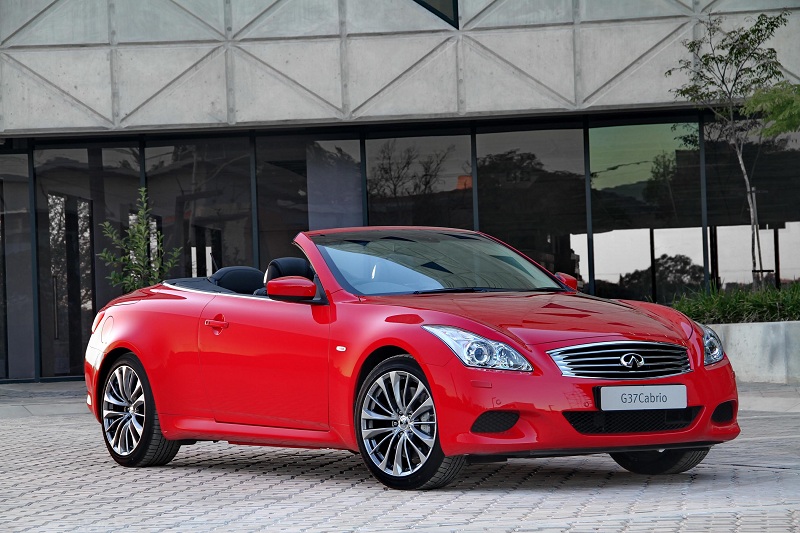 The M37 Sedan has the same 3.7-litre V6 making the same power, using the same seven speed automatic and it will run to 100kph in 6.2-seconds and consume 11.4-litres of fuel on the combined cycle.

The M30d is another engine derivative and it’s a 3.0-litre common rail diesel with 175kW and 550Nm, also mated to the seven speed automatic and rear wheel drive. It gets to 100kph in 6.9-seconds and consumes 7.8-litres per 100km; with the diesel engine adding 150kg of weight to the M sedan. 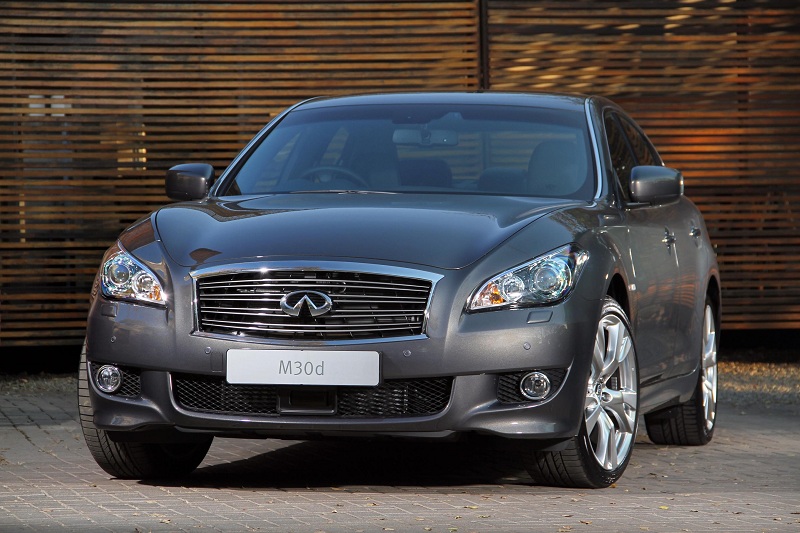 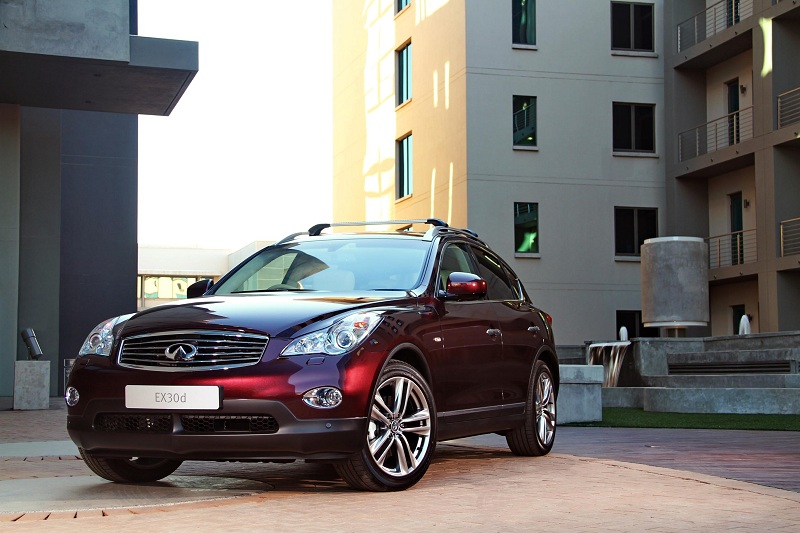 Finally, we get to the FX SUV range which we had the opportunity of actually driving. These, incidentally, are the vehicles Infiniti think will be most successful out the gates, with a strong demand for luxury SUV’s fuelling local sales. They come with all three engines derivatives in attendance and the seven speed automatic through the whole range. The FX50 being the flagship model offering a 5.0-litre V8 with 287kW and 500Nm and a 0-100kph sprint in 5.8-seconds.

This engine offers less torque than the diesel but it makes a gruff sound and enjoys revving out to its redline. Its all-wheel-drive system works cleverly to be rear-wheel-drive 100% of the time, until power needs to be transferred where most needed for traction. The FX is most certainly biased for on-road driving purposes and probably won’t be visiting an off-road obstacle course any time soon. Our vehicle had 21-inch rims which would put an Audi Q7 V12’s wheels to shame; and quite how much tyres must cost for such a wheel I shudder to think.

The overwhelming first impression of the FX is of a big car that’s styled in a deceptive manner with fine touches in the details. Stuff like the door handles that are meant to mimic samurai swords and the seats which are patterned like kimonos. The FX doesn’t look big when sat in the car park, but once you’re out and about in little Western Cape towns, only then do you realise it’s a car with serious heft and width. We had to deactivate the ‘lane departure warning’ system because it kept buzzing as we traced across the Western Cape’s narrow farm roads. Average fuel consumption was above 15-litres per 100km, not a surprise for a two ton plus, V8, SUV.

The FX30d we also drove, which shares the identical specifications mentioned earlier, will consume closer to 9-litres per 100km which is far easier to stomach for the consumer. However, it felt lacking on overtaking ability at times with a slow kick down on the gearbox, but the engine was quiet overall and well suited for cruising. Overall, both FX models had a suitably impressive sporting, rigid feel with the ride quality erring towards the firm and connected side of things rather than soft, floppy or unsophisticated. I enjoyed both vehicles despite the abysmal driving conditions, but I’ve driven enough launches in the wet to know one can’t form anything like an informed opinion until you sample the vehicles in the dry. 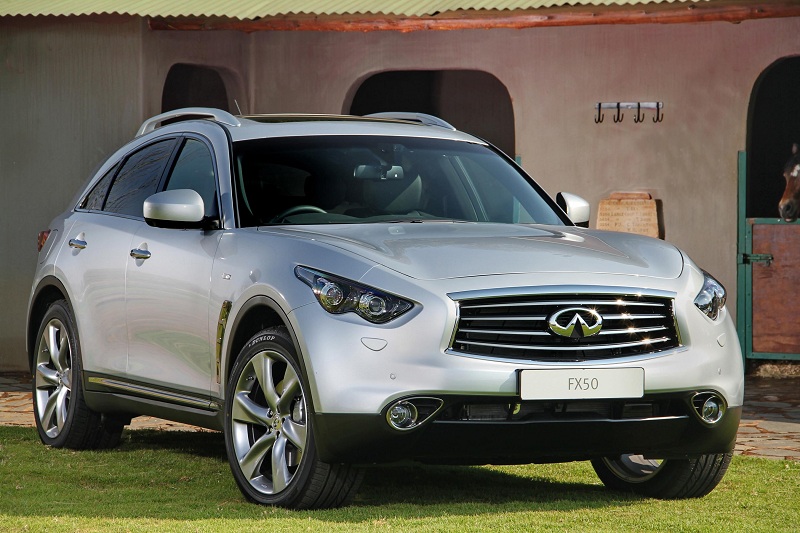 Several grades of specification are on offer across the Infiniti range, and we’ll include the extensive pricing details down below. One thing worth mentioning is the Multimedia Pack which comes as standard on GT Premium and S Premium grades, the two highest grades. It features a 30gig HDD Sat Nav, touch screen, 1 disc DivX/MP3/WMA player and an Infiniti 10gig hard drive music box. An ‘all-around-reversing-camera’ can stitch four camera views together and give a bird’s eye view of your Infiniti as you park. Nifty and helpful stuff to protect those curved fenders.

One thing I’d hoped Infiniti would do is attack from the get go with aggressive, low pricing. The game is wide open at the moment: Volvo has slipped off the premium radar lately, Audi are only there and there abouts these days against the other mighty, German two; and Lexus, well they aren’t in direct competition apparently, and Jaguar always flatters to deceive on the sales front. Maybe the Infiniti samurai’s could’ve broken through the sternly controlled German phalanx? But for my liking the pricing is higher than hoped. The cheapest vehicle they sell is the ‘Standard Model’ EX30d at R595, 000 with the most expensive S Premium Grade FX50 going for R856, 000. That’s not bad for a flagship model, but a few more vehicles in the R500, 000 price bracket could’ve genuinely shook-up the premium car segment. Following the uptake of Infiniti over the next 12 month will be interesting none the less.

Infiniti will soon be available in the car rental fleets of Avis, Budget, First Car Rental and other car rental companies.  In the meantime have a look at similar luxury car rental options and SUV’s like the Nissan Juke.

Ray Leathern is South Africa’s 2010 Motoring Journalist of the Year in the magazine category, he is also a member of SA’s 2011 Car of the Year jury and is a regular contributor to SA Car Fan.