Kgalagadi Transfrontier Park and the Orange River: Our experience

After travelling about 5 175 kilometres, I thought it would be a good idea to take stock of what we saw and experienced so far and share it with you.

If you want to go on your own adventure through Africa, you might want to have a look at 4×4 hire South Africa to find the best vehicle for your adventure.

From Lesotho we headed to Upington to stay at Kalagadi Transfrontier Park. The dry parts between Kimberley and Upington reminded us of Australia and we almost missed our other home. Very little but scrub and low acacia and thorn trees are what cought my eye. No kangaroos, I’m afraid, but the odd buck served as a great consilation! 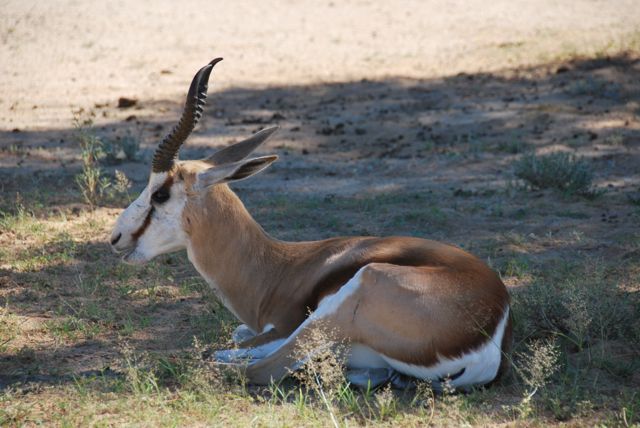 It was good to see the odd “bokkie” while driving to Kalagadi. Photo’s: Stan Rogers

Road works ahead: a special way of fixing roads

The roads in SA are generally in a good condition except for road works here and there. We had to wait no less than 45 minutes for traffic to pass. South Africans have a funny way of doing things when it comes to road works. It entails working on one side of the road for 5 kilometres and then the other side for another 5 kilometres and so it goes on for miles ahead. But it is to improve the roads, so I won’t complain!

We finally arrived at the banks of the Orange River and were quite amazed by the beautiful town of Upington. We wanted to jump for joy as we discovered this mighty river (which is, incidentaly, South Africa’s longest). It brings greenery, large scale grape and other agricultural production under irrigation along its banks. Not ony that, is a treat for they eye after so much ruggedness on the road and transforms the landscape.

Did you know the Orange River crashes through a mighty gorge at Augrabies Falls National Park?

Augrabies: what a beautiful noise

The word “Augrabies” is a Khoi/San derivation meaning “Place of Noise” and one can well imagine when the Orange floods and the spray can be seen high above the gorge what the noise may be.

Two lovely days were spent at Augrabies Falls relaxing, taking long walks through the bush and going on a game drive in the morning where we saw Gemsbok, Giraffe and Hartebeest. 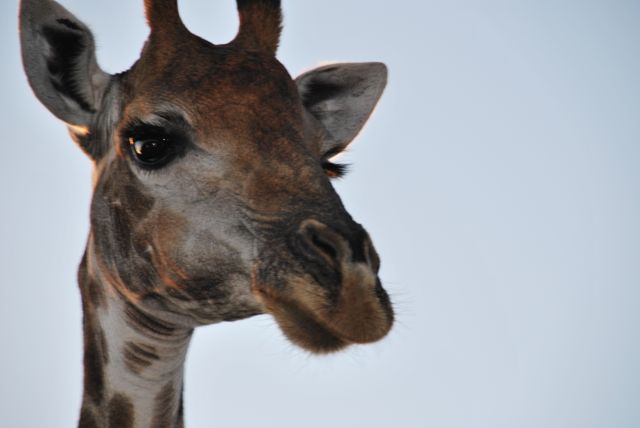 We saw Giraffe while relaxing at Augrabies Falls.

We found a great camping spot 20 kms out of Upington called “Oranjerus”. This was much better than the Eiland Caravan Park in Upington where we had previously stayed which was rather run down – with 8 out of 10 showerheads missing in the showers.

At Oranjerus we also met some South Africans by the name of Frikkie and Fiona travelling in a Defender TD5 who kept us company through much of the Kgalagadi National Park and into Namibia. You know how Land Rover people soon get to know each other?

You’ve got a friend in a fellow Landy

Frikkie and Fiona are a great couple and have travelled much of Africa including Morocco and they passed on many tips. Kgalagadi National Park is much bigger, wilder and drier than our previous experiences in the Kruger National Park.

We were lucky to see some cheetahs trying to hunt as well as plenty of Gemsbok, Red Hartebeest and Giraffe. I once realised that the animals are what makes Africa, Africa….

Nights were spent star gazing through a telescope of another South African called Johan at Jupiter’s moons, Venus and Mars in a sky filled with a billion more stars than you ever see in the “civilized cities”.

Accommodation (including camping) seems to book out in Kgalagadi Transfrontier Park rather quickly. A lack of available camping spots on the last night saw us unable to camp and having to take a Safari Tent at Kgalagadi Tented Camp at USD$120 – which broke the budget but was sheer luxury and a lovely, quiet place to stay.

Reluctantly we finally left Kgalagadi and passed through the Namibian border control at Mata Mata with a minimum of fuss.  The officials were quite cheerful and accommodating. We paid our Namibian road tax of N$ 240 (USD$ 32) and were on our way. They didn’t even want to stamp our Carnet, just check VIN numbers on Tin Can. 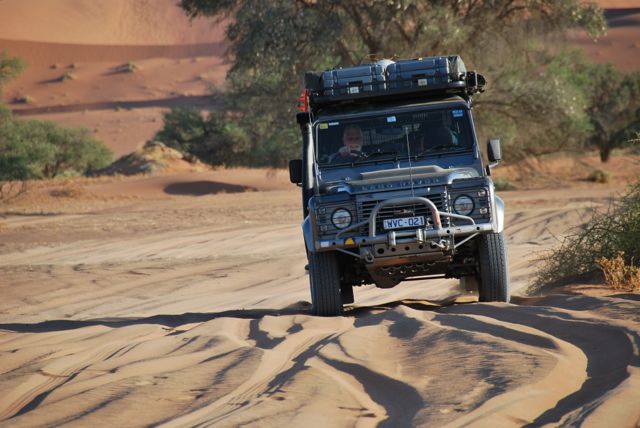 Remember to keep an eye out for our next post. We will then be riding the dunes of the Sossusvlei!

Let’s hope the wildlife in the wild places anticipated ahead equals South Africa’s wildlife – as it was impressive!