Welcome to Ford’s Volkswagen GTI competitor. As before it’s called the Ford Focus ST and in every possible way the new model is better than the previous Focus ST it replaces. The engine has been downsized to a turbocharged 2.0 litre, four-cylinder unit from the 2.5 litre turbocharged, inline five, of the previous generation. Members of the ST Owners Club may be watching with baited breath to see if that downsizing has ruined the muscly character of the Focus ST, but they need not worry. The Focus ST now makes 184 kW @ 5 500 rpm and 360 Nm of torque from as low as 2 000 rpm. 0 – 100 km/h is achieved in 6.5 seconds and the top speed is 248 km/h. It is a ballistic engine and despite the loss of a cylinder, it is 10% more powerful and 20% more economical. It will consume just 7.2 litres per 100km (Ford claim) and emit just 169 g/km of CO2 if you take it on a leisurely drive. 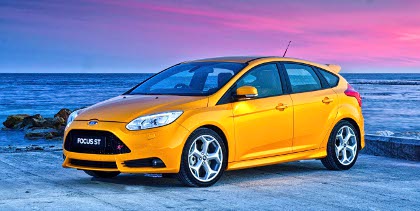 Ford was good enough to fly out, all the way from America to the launch in South Africa, Chief SVT Engineer, Jamaal Habeed, who developed the new Focus ST. I enthused in getting some tasty tidbits of information from the man responsible for this car. Jamaal says the car is about 55 pounds lighter, or 25kg in our language, than the outgoing model. Interestingly though, all of that comes from the engine, or more specifically the frontend of the car. The frontend is 30% lighter than the old model.

Many had a bugbear with the heavy front end of the old Focus ST, so it’s good to know that’s been fixed. Jamaal also reckons one of the biggest challenges in calibrating the car came in redoing the rear suspension. Several months into the project they scrapped their plans and started again. They simply weren’t happy with the body control it was displaying so they lowered the car by a further 10mm and uprated and stiffened the knuckles on the rear end. Jamaal really wanted the engagement of a rear-wheel drive car for the new Focus ST, despite its front-wheel drive layout. You really can tell this was the man who developed the Ford GT for goodness sake.

We got to test the new car on a balmy 400 km route from George to Port Elizabeth, along with a section of the Garden Route, and over the Outeniqua Pass and through Joubertina before finishing at Aldo Scribante from some track time with the new Ford Focus ST. It is epic, fast, fun to drive and a delight on the racetrack.

Ironically perhaps, considering it is a Ford, but this is the first time the Ford Focus ST will be sold in America. It is an integral part of Ford’s, vast, global strategy and as such it was engineered by a United Nations type team of Ford Europe and Ford USA’s best guys and it will be built in eight different factories and sold in 40 countries worldwide. Just as is, one car for all these markets. 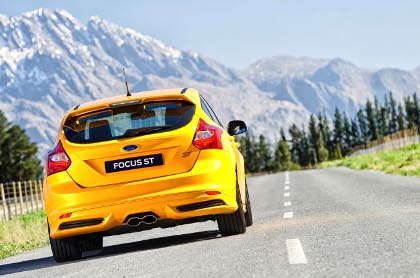 Jack of all trades

You can kind of tell when you drive it that it’s a bit undefined somehow. It’s good at a lot of things but not really brilliant at any one thing. Asking Jamaal about it, he admitted to me that developing and building a ‘world car’ out of the Focus ST was by far the biggest challenge of the project. The compromise and consideration of all world markets meant they couldn’t quite do all the things they necessarily wanted on the car.

I can comment that my favorite aspects of the car and the ones I think they can pat themselves on the back over are the pricing (see below), the power and thrust from the engine, the instant response in-gear and the rigid chassis with a fun slidy rear-end on the race track. For the price Ford is asking for it, you really can’t get this much power for any less.

Less favorite aspects of the car are that I don’t think it looks particularly sexy, it has a rather unrefined interior and there is a lot of torque steer when you accelerate aggressively. The wandering along the road when you’re on the throttle is noticeable. The car can feel quite imprecise at times. I think it would have done well to have a proper mechanical limited-slip-differential to tie that front end down to the ground. 360 Nm of torque is a lot for the electronic torque vectoring and torque steer compensation system to handle. The variable ratio steering system the ST has might also have something to do with it. I have no doubt the LSD was an omission because of pricing and with the American market in mind.

The Ford Focus ST probably lacks that single-minded pursuit of handling, dynamics, style and new technology to put it into the bracket of groundbreaking. It is fast though and it scores high on cost-effectiveness, but it’s still suffered by many of the byproducts of this ‘world car’ syndrome.