I have always dreamt of going paragliding in Cape Town, but never had the opportunity or the will to do it. Luckily my friends whom I live with wanted to try paragliding off Lion’s Head, even my friend who is afraid of heights wanted to experience the feeling of flying high in the sky.

So that is how Saturday, the 4th of December, became a memorable day. The four of us arrived at the meeting point on Signall Hill at 11am. We waited for a few minutes for the remainder of the Cape Town Tandem Paragliding crew to arrive.

We were told to hike up Lion’s Head for about 15 minutes, to the paragliding spot. Although the sky was partly cloudy with patches of sun, it was still good enough weather for our paragliding adventure. A feeling of excitement gripped us as we arrived at the jumping spot where people were waiting to sail into the air. 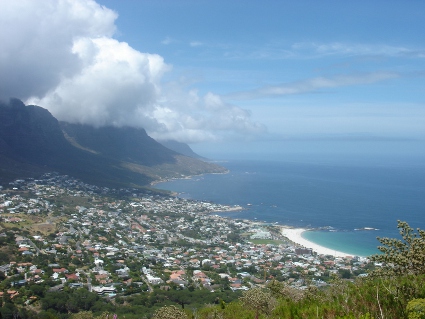 Before it was our turn, we had to sign some papers, indemnity forms to prove that we agreed to do this at our own risk. After signing the papers, I was the first to go. I was suited up and assigned an instructor, Wayne. Wayne told me to walk slowly down the hill, towards the spot we would start off. Trying not to slip and fall, because I was feeling a bit nervous, I walked downwards.

Wayne did the last safety check to see if every rope was tightened and then we ran downwards together until the kite filled with air and we lifted up. I wasn’t allowed to sit yet, until Wayne said it was safe. After a few seconds I could sit down and I was actually paragliding from Lion’s Head! Flying in the air with a huge kite.

The feeling of being in the air, flying, was incredible. You feel so free, even though you have an instructor hanging with you under the kite. While flying you have an amazing view of Lion’s Head, The Twelve Apostles, Camps Bay beach and the ocean. You’ve got the wind in your hair and butterflies in your stomach. 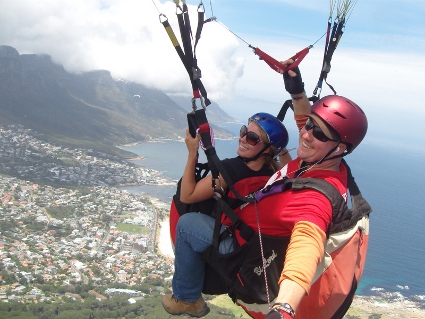 While flying in the air, Wayne took some photo’s with a camera on a pole and along the way we did some tricks, like spinning around and fast spiralling. After about 20 minutes in the air, we started to slowly head for the ground again for a soft landing on the grass alongside Camps Bay beach.

Being on ground again felt a bit funny, I had the feeling I was still flying in the air, but that feeling passed soon. Wayne took some photos of us on the ground and started to pack up the kite while I waited for my friends who were still in the air.

Within the next minutes my friends were on the ground, landing one after each other and for a while we stood together talking about what we just did as the crew packed up the paragliding equipment and burnt our photo’s on a CD-ROM. 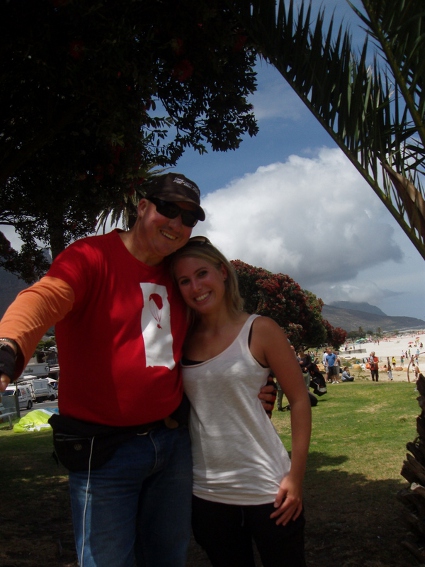 When everything was packed, we settled ourselves in the car for our drive back to Signall Hill, where we paid for our tour and went home tired, but very satisfied from our Cape Town paragliding experience.

If you need to hire a specific vehicle during your trip to Cape Town, you might want to have a look at the vehicles on offer. Car hire Cape Town is sure to have the perfect vehicle for your adventure.