According to Caroline Washaya-Mayo, a spokesperson for the Zimbabwe Parks and Wildlife Management Authority (Zimparks), waterholes have been contaminated with the unidentified poison at the Gonarezhou, Mana Pools, Zambezi, Charara and Matsudona national parks.

She was quoted by the Sunday Mail newspaper as saying that this is the only time they have had cases of poaching involving chemicals, adding that poachers are using different techniques which are silent and do not raise suspicion. 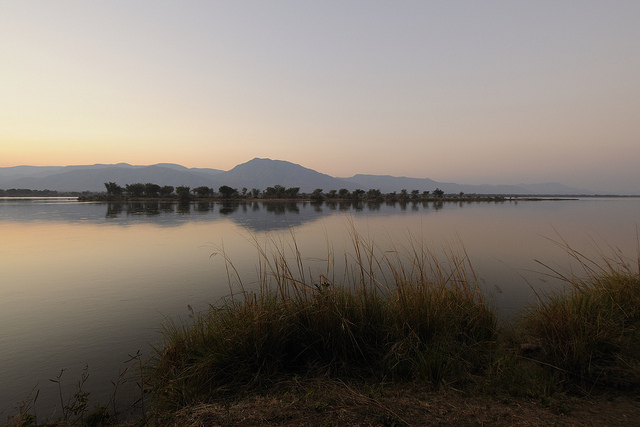 Above: The beautiful Mana Pools are one of the waterholes that have been contiminated in order to kll rhinos for their horns. Photo by: Jacashgone

Nine elephants, five lions, two buffaloes and several vultures are among the animals known to have died after drinking the water, Ryan Truscott from SAPA reports. Authorities are concerned that the health of nearby villages may be at risk if residents accidentally drink the contaminated water and urged game rangers patrolling the areas to carry their own water.

“Rhinos should not be farmed”

Meanwhile, an informal survey was initiated by the International Rhino Foundation (IRF) with a global poll on whether trade should resume and if rhinos should be farmed for their horns to stop rampant poaching.

“Legalisation of the rhino-horn trade will strengthen the misconception that rhino horn has ‘special powers’ while farming rhinos for their prized horns will keep them in depressing, cramped conditions and worsen illegal trade” was some of the views according to Sheree Bega from iol.co.za.

The survey of the IRF comes at a time when the government is conducting separate studies in the viability of dehorning and the legal trade in rhino horn.

In the survey, an overwhelming 78 percent believe trade in rhino horn should not be legalised, while only 12 percent throw their weight behind the controversial proposal.

“People at the top are saying yes”

Some commentators remark the trade should only be legalised in a way that benefits conservation. “I think if farming is legalised a portion of the proceeds must go back to poaching protection and the conservation of wild rhinos,” says a US woman in her 20s. Bega reports that another respondent from Africa believes farming can be considered once the species is no longer endangered.

Another African respondent comments that legalising rhino trade will only create an additional avenue for those already trading illegally. A European agrees: “I believe that the legalisation of trade in rhino horn would cause an upsurge in poaching to meet demand and give poachers a legal avenue to dispose of their horn. Do we really want to see rhinos farmed for horn, kept in cramped, depressing conditions, with no quality life?”

Bega reports that commenting on the survey, Pelhalm Jones of the Private Rhino Owner’s Association, told Independent Newspapers all the people at the top of the pyramid are saying legal trade and dehorning are definite possibilities. “These are scientists and the most credible conservationists in the country. It’s very easy when you don’t have rhinos to turn around and say no to trade and dehorning.”

If you are interested in going on a 4×4 adventure here, but find yourself in need of a vehicle, you might want to consider 4×4 hire Zimbabwe to find the perfect vehicle for your travel needs.