TEDxCapeTown: what to expect

TEDxCape Town is an annual event where renowned speakers share their knowledge and insights and takes place on 21 July this year at the Baxter Theatre in Rondebosch.

TED stands for technology, entertainment, design and is a non-profit organisation held over the entire world every single year. Justin Beswick and Bernelle Verster organised the first TEDxCapeTown event in April 2011 and are busy organising TEDxCapeTown 2012 with the theme “What We Play Is Life”.

This event is a “must” for every individual in Cape Town that has a passion for positive change and the impact of changemakers on South Africa. It is a day to be inspired by the prominent thinkers and individuals shaping lives in the country. The day will also provide the opportunity to interact with individuals who hold the same mindset, who are looking to make a difference and wish to mingle with the future changemakers of the country.

According to the organisers, Justin Beswick and Bernelle Verster, it’s more than an event; it is a showcase of what South Africans and Africans can actually create on this planet. A better life without causing damage is mainly what this illustration is about. 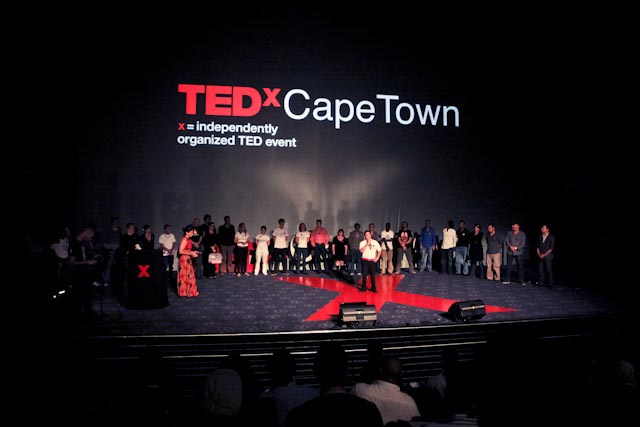 TEDxCape Town 2011 was a huge success and this year’s event promises to be even better. Photo: Paul Ward

Bernelle (age 30) is originally from Johannesburg, Gauteng, and has a background in biology and chemistry. Her goal is to improve quality of life, especially for South Africans and Africans at large without exploiting and causing damage by using biology. To get better communication between business and entrepreneurs, technology and the public is what Bernelle’s vision is all about. Bernelle met Justin through a business plan competition, while he was working on a bio-fuel concept and this is how TEDxCapeTown came about.

Drive South Africa asked Bernelle what people can expect from this year’s event, what the theme is all about and what the highlight is.

What We Play Is Life: how the theme came about

The beauty of TEDxCape Town is that we manage to bring very diverse points of view together, which definitely adds to the magic of the event. The fear of failure served as “inspiration” for the theme, “What We Play Is Life”. The theme came about as we were lamenting how people are afraid to fail.

The core organizers are entrepreneurs, and it’s an awesome, high-risk exercise. The way we do TEDxCape Town is the way we do entrepreneurship, and the way we believe business and initiatives should be run. So we were thinking about how we can name a theme that inspires people to be more willing to start something in this way.

Watch the video taken at last year’s TEDxCape Town event below to get an idea of what to expect.

The biggest thing is being willing to fail, and learning from that. This is the one big thing that South Africans need to learn to do. We have a very high fear of failure. The second thing is to work in teams. That way you are never alone and you have a wider skill set and it’s more fun. So just try it, make a start!

Our BIG passion is learning from nature

Facing the fear of failure fits very well with our other big passion – Biomimicry – learning from nature (we are also in the core team of BiomimicrySA – www.biomimicrysa.co.za and run that the same way as we run TEDxCape Town). Nature integrates the unexpected, that’s how things evolve, and nature builds cooperative relationships, and incorporates the unexpected and it’s beautiful and fun, yet fragile and interdependent.

We went looking for quotes that could embody this, with a bunch of friends late one night, and the quote by jazz musician Louis Armstrong just captured it best. We also wanted something that is very open to interpretation, and last night at our weekly meeting we realized we all have a very different view on what the theme means – that’s lots of fun and laughter and we hope the audience take their own view on it too.

When you play you feel safe and failing is not a bad thing. You learn to let go and just let it happen.

Each speaker has something valuable to add

The highlight of the event for me is that all the speakers together, tell a story. It is much broader than last year and the other independently organised TEDx events we have helped make happen this year. The speakers all have something that I feel adds to what I’ve learned over the last year, and that I wish to share with the audience. It’s about building community – because more than anything else that is what TEDxCape Town 2011 means to me, it is so full of community and I think there is a huge need in South Africa for community and citizenship right now.

Play is interpreted in various ways at this event. Prof. Tim Noakes considers the mindset in sport, Peter Greenwall addresses the playfulness of failing directly in what promises to be a hilarious talk! Monique Schiess looks at playing at scale – sharing her experience behind AfrikaBurn, and Mbali Vilakazi and Winslow Schalkwyk play with words. Speakers like Arthur Attwell, Chris Loker, Justin R Mellville and others look at ‘breaking’ the rules, and then we have some surprises in store too!

Save the environment: how do you contribute?

TEDxCape Town 2011 was fairly environmentally focused. What we’ve learned since then is that to ‘save the environment’ we have to relook our relationship with ourselves and each other as well (and not take ourselves too seriously).

While the event as a whole tells this story, two speakers analyze this relationship in particular. Warren Nilsson talks about how to sustain positive change inside organizations, and Helene Smit talks about the unconscious mind, individually and collectively. Her work often involves facilitating people processes about issues that lie beneath the surface and need to be carefully brought into the conversation. She’s really interesting, and when we first met last year to explore speaking at TEDxCapeTown we were so intrigued by the process at play during a TEDx event – that awesome feeling the audience, speakers, sponsors and team of organisers share, that she is hosting a whole TEDx event herself – TEDxPrinceAlbert ‘Meet Me There’ on 1 September 2012 (http://tedxprincealbert.yousemble.com). It is a community driven event, roping in the whole town of Prince Albert, and occurring in the Karoo spring time, so it promises to be a beautiful event. The speakers include national and international experts across a wide range of topics, this is definitely my highlight for the rest of the year.

To get the lowdown on events around South Africa, keep an eye out on our events page.