Cape Town Stadium (also known as Green Point Stadium) was built to witness victorious moments in history. But if you don’t have a way of getting there, then you’re not going to be witnessing much at all. With loads options for transport to Cape Town Station, you’re set to getting to the arena where crowds go wild and legends are made.

The MyCiTi Bus is a system sent from heaven. It is affordable, reliable and has a track record of getting commutors to destinations safely since it started running in 2010. The My CiTi Bus routes weave their way through Cape Town CBD and run along main routes in and out of Cape Town. Along these routes is a Granger Bay Station pick up and drop off point where you’ll be able to hop off a stone’s throw away from the stadium. 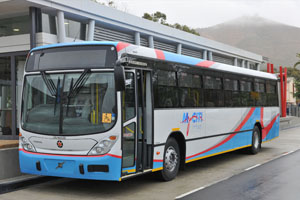 Above: My CiTi Bus

View the My CiTi Bus route map and fares.

Freedom! All you have to do is book your car hire in Cape Town, pick it up and transport yourself to Cape Town Stadium. You’ll find parking right outside the stadium, in the parking lot, if you arrive for your event early enough. Make sure you check if there are road closures scheduled for the particular event you wish to go see. Often the city closes main roads around the Cape Town Stadium for the safety of the hordes of pedestrians streaming into the venue.

Situated in Green Point, during the day you can happily walk to the stadium from anywhere in the Cape Town CBD or even the V & A Waterfront. It’s a 2.6 km walk from Cape Town station, but an extremely scenic and pleasant one. In 2010, when South Africa hosted the Soccer World Cup, thousands of people walked from different parts of the Cape Town CBD to the stadium on what is called the ‘Fan Walk’. The Fan Walk runs along Darling, Strand, Adderley, Riebeek and Waterkant streets, through to Somerset Road, with dedicated pedestrian paths across the busy streets of Buitengracht Street and Western Boulevard. Make sure you do the walk during the day for added safety.

Meter cabs are a solid way of knowing that you’re going to get somewhere without getting lost. You can almost always spot a meter cab in Cape Town’s Long Street. These cabs line the streets when there are big events on in Cape Town and travelers are in need of transport. If you don’t want to just grab-a-cab, you can always pre-book one with the help of your accommodation host or receptionist.

For big events, there is ample security from 17:00 until after the last train has left the station. Stations which have parking lots dedicated to the park-n-ride service include Athlone, Ottery, Century City, Claremont, Retreat, Fish Hoek, Oosterzee, Goodwood, Kuils River and Strand. The Park-n-Ride service is safest to use for big events when organizers have confirmed that they will be providing security on the trains for late transport and that there will be buses provided to get travelers to and from Cape Town Stadium.

If there is a big event on at Cape Town Stadium, often the event organizers will make sure transport to Cape Town Stadium via event shuttles is available for people. These event shuttles pick up and drop people off from various points in the northern suburbs and southern suburbs. The pickup and drop off locations differ depending on who the event is run by. Common pick up and drop off points are found in Hout Bay, the University of Cape Town (UCT) and Century City.

Now that you know what options for transport to Cape Town Stadium are on offer, don’t miss out on the chance to be part of the crowd.

Keen to see what’s happening in and around Cape Town? Check out our events page.

If you need to hire a specific vehicle during your trip to Cape Town, you might want to consider car hire Cape Town for your transportation needs.