A Visitor's Guide to Durban and Surrounds - MapStudio

MapStudio has a 55-year history in the mapping industry of South Africa. Hence over the years, they have also expanded in being involved with travel and lifestyle publications.
Recently they have launched a series of books and magazines which will help one to become more accustomed to certain locations within Southern Africa. 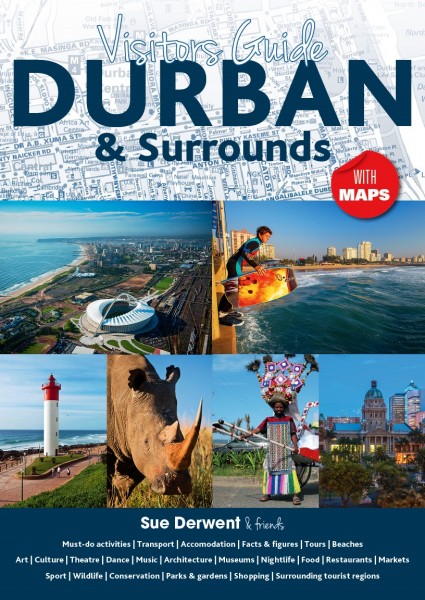 Today we will be reviewing their visitor’s guide book on Durban and surrounds. Recent developments in certain major areas of the city are starting to make the rest of the country and would turn their heads and take notice of a part of South Africa which has often been guilty of being a little too laidback.

From the world-class soccer stadium precinct to the recent rehabilitation of the beach promenade which is a byproduct of the 2010 Fifa World cup to a vibrant, eclectic and rich cultural heritage. Durban is a city where people from different walks of life converge to create a truly diverse cosmopolitan African experience.

The city really is a world of contrast and colour, beaches and nearby mountains make it a visual feast and its year-round temperate weather have ensured many local tourists flock to the city, year in and year out also largely due to its proximity to the financial hub of the country Johannesburg.

Durban’s sleepy nature often makes people have the preconception that nothing really happens there. MapStudio has done an excellent job of showcasing the highlights of the city for which there are many. It’s the type of place that if you have your ear to the ground, you will be treated to concerts, major sporting and cultural events and an abundance of tantalizing food which has become famous for its Asian influence, largely due to its massive Indian community which has made Durban their home.

From underground hip hop to drumming circles, temples, art deco and colonial style architecture and hard to find alternative dive bars and reggae dancehalls to the home of indigenous music like Maskandi Durban on South Africa’s Eastern Coast are widely regarded as a hidden gem.

This concise book is a nice introduction to anyone wanting to explore the city for the first time and was written by Sue Derwent a long time Durban local. She has done extremely well in explaining and perusing through all the dynamic elements that make the city fascinating and a treat to explore.

If you plan on starting your journey from another location, you might want to have a look at car rental South Africa for the best option to get you to these amazing locations.