From the 28th of November, Cape Town will be lighting up Adderly Street to celebrate the Festive Season. The official switching on of the lights on Adderley Street in Cape Town’s largest public open-air event. For this event, several streets will be temporarily closed to prepare for the event, where attendance can exceed 100 000 people. From 25 November at 9 am until 29 November at 7 pm the following streets will be closed to traffic:

Parking is not allowed in Adderley Street from 7 am to midnight on Sunday the 28th of November and the following roads are affected on this date:

There are special parking areas will be set up at the Grand Parade and in Queen Victoria and Wale Streets. The festivities begin on Sunday with a concert playing from 4 pm to 8 pm, when Executive Mayor Dan Plato will officially switch on the festive lights. For the decorations, more than five kilometres of rope lighting is used, plus the six meters high Christmas tree decoration at the Company Gardens entrance. During these days medical service, information/lost and found facilities are staged up near the Cape Town station. Temporary toilet facilities are available at designated locations. Go out and be part of the lights to make the beginning of the Festive Season. 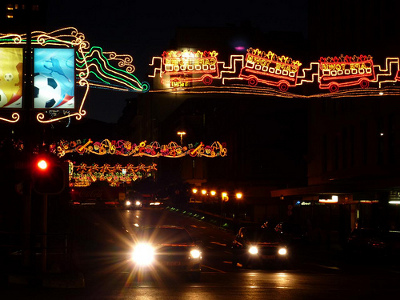 If you need to hire a specific vehicle during your trip to Cape Town then here are some options below;