I have made a few South African friends during my first few months in Cape Town and they invited me to go surfing with them at a place called Big Bay in Blouberg, which lies at the beginning of the Cape West Coast.

I have surfed before in France and a couple of times in Muizenberg, but Big Bay was new for me. I had heard some stories about Big Bay and the West Coast from other friends surfing in Cape Town, so I was looking forward to it.

The morning we planned to set off the sky was grey and it was raining. A bit disappointed that the sun wasn’t shining we headed to Big Bay early in the morning. After a relaxing ride along the coast line and a stop for some coffee we reached Blouberg. Even though it was still early in the morning the parking lot was already full, but luck was with us as a car just drove away from a parking spot in front of us. 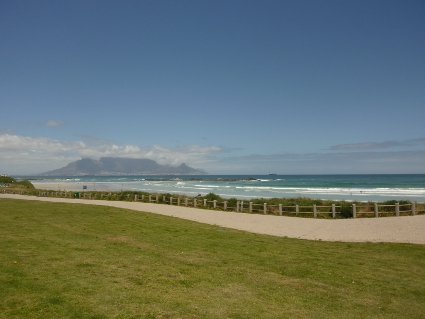 My friends have been surfing in Big Bay before and they knew where to go. We walked up to the Surf Shop, Surf Zone, where we were happily greeted. We rented boards and wetsuits for 4 hours. In the shop we put on our wetsuits, while the guys from the shop were getting the boards ready. I choose to surf on an 8 foot board, all the times before I had surfed was on a 9 foot long board, so I decided to try a slightly smaller one.

When we were all ready and our bags safely stashed behind the counter of the shop, we walked with our boards under our arms to the beach. The sky was still grey, but it had stopped raining and I was getting more excited. Arriving on the beach, I found out that the sand was a lot muddier than on other beaches, but as we were going into the water any ways I didn’t mind.

I strapped the surfboard leash around my ankle and walked into the water. Surprisingly the water was not cold, the few times I had surfed before in Muizenberg, the water was extremely cold. Pleased with this stroke of fortune I hurried deeper into the water to get to the waves. 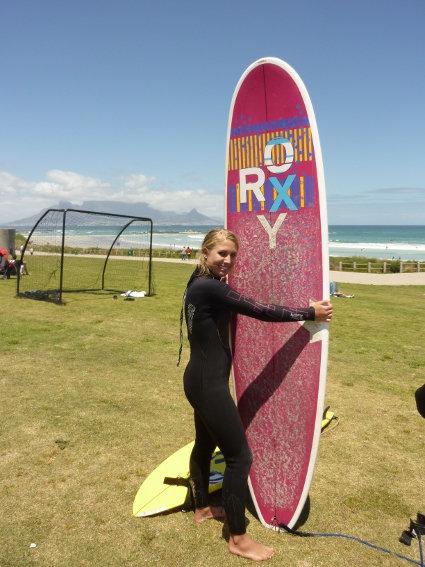 The waves were looking good and the sun seemed to pull through the clouds. In the water we caught a few good waves and tried not to hit each other while catching a wave. We surfed for 4 hours, taking breaks in between and resting on the beach. At the end of our surf the sun had pulled through completely and all the clouds had disappeared.

We brought our surf boards and suits back to the surf shop and took a quick run to the showers at the end of the boulevard rinse the salt off our bodies. Once we were all freshened up and dressed, we sat on one of the terraces on the boulevard to have a proper lunch and talk about surfing Big Bay.

Around 3pm we all felt tired so we agreed that it was time to call it a day and return to Cape Town. Next time I am going surfing, I am definitely going to Blouberg again. The waves were incredible and the atmosphere on the boulevard is very friendly and relaxed. To find out more about what South Africa’s West Coast has to offer read Drive South Africa’s Cape West Coast article.