Exploring The Mountain Kingdom in Lesotho on a 4x4 track

After hearing much about the Sani Pass which winds its way 2900 meters up the Drakensberg mountains into Lesotho and is rated one of South Africa’s premier 4 wheel drive challenges, we had always thought we had to give it a go with our equipped 4x4 – and Lesotho was always on the route plan. A good choice it turns out. Lesotho is magnificent mountain country and not called “The Mountain Kingdom” for nothing, but first some observations about the previous few days travelling from the KwaZulu-Natal South Coast through Durban and then to Midmar Dam and onto Underberg at the foot of the Drakensberg ranges. 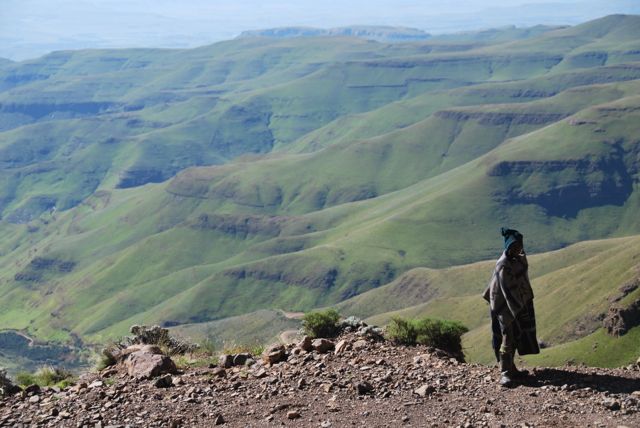 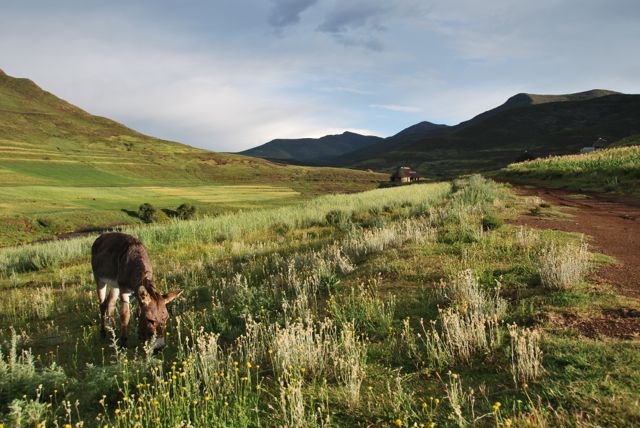 A donkey grazing on Sani pass.

Durban is South Africa’s busiest port and second biggest city and it and, given its mild subtropical climate of 30C most of the time, the “South Coast” used to be the prime holiday destination of most “Joburgites”. Durban’s seafront esplanade was thronged by holiday hotels and colourful “rickshaw boys” taking tourists around for afternoon ice creams. and site-seeing Both Marianne and I have some fond memories of childhood summer holidays spent in Durban and the South Coast. The Durban “Indian Market “ used to be a thing of wonder to a small child – with its colourful Indian shopkeepers and the smell of exotic spices. Unfortunately, it burned down in 1974 in dubious circumstances and has now become the “Victorian Market” – which is not a shadow of its former self. A few desultory Indian spice traders still have their stalls (and I spoke to a couple of old merchants who delighted in reminiscing about the old days), but mostly now it looks like any other third world market. The atmosphere has gone. Ahh- the New Africa…..!

After a day mooching around half-forgotten places in Durban, we headed out to Midmar Dam Nature Reserve near Pietermaritzburg where we were the only campers in a vast lakeside camping area. It was quiet and secluded – a good way to finish off the day. A lovely treed spot. The next morning we went into the little country town of Howick to stock up on groceries and were struck by how “British” many of the locals appeared in features and invoice. Mostly British settlers in general settled Natal in the early 20th century and this area, in particular, seems to have got its fair share? Somewhat different to the average South African and the Afrikaners of the Free State and Gauteng. We headed off to Underberg at the foot of the Drakensberg and camped at a place recommended by other travellers called “Dragons Rest Camp” GPS S29,50’201 E29,26’778. It was a beautiful, secluded spot nestled in pine trees next to a lake and with an old English style mansion nearby. It seemed almost European and reminded us of recent walking in Spain! We were the only campers to enjoy the huge campfire we lit that night. An early start was planned for the next day to tackle the famed Sani Pass into Lesotho. 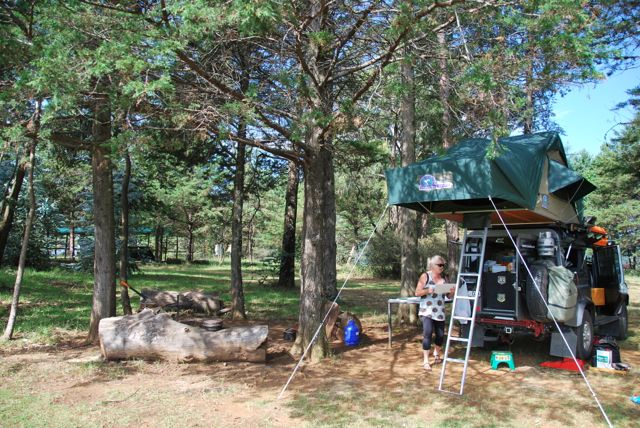 First chance to throw a grumbling “Tin Can” into low range! The Sani Pass is begun by South African border control at the foot of the pass and then Lesotho border post only an hour later once you have ground your way up 15kms of the pass and climbed to 2874M! 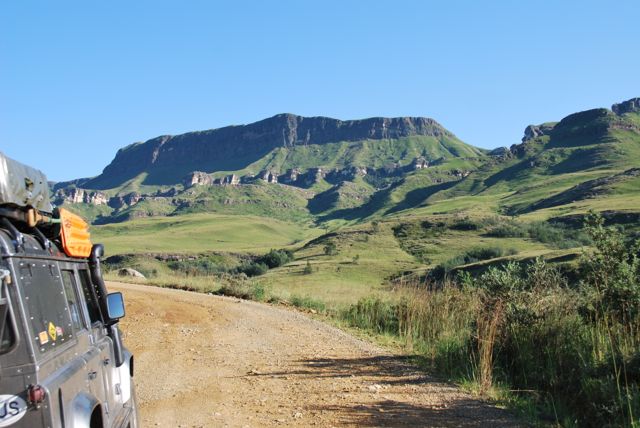 The start of the Sani Pass in Lesotho.

Who knows what happens if you check out of South Africa but don’t make it to the top? But we did – and despite some early trepidation (especially seeing as Lesotho official blurb states no importation of CB radios or liquor, both of which we may perhaps have had), passing through our first passport control and the border was a breeze. We were the only vehicle at both posts and officials were friendly enough and quick. Nobody asked any questions or even wanted to even see the vehicle Carnet. The track up the Pass is definitely 4-wheel drive territory –and low range had to be engaged more than once. (In fact notices at South African border control forbid anything other than a 4WD attempting it.) But I wouldn’t rate it especially difficult (in a 4x4 anyway!) and not much different to any steep mountain track in the Victorian High Country that we are used to. It is high though at nearly 10,000 feet and commands imposing views of the valley one leaves behind. At the top, we had morning coffee at the Sani Top Chalets – which boasts as being the highest pub in Africa at 2,934M! 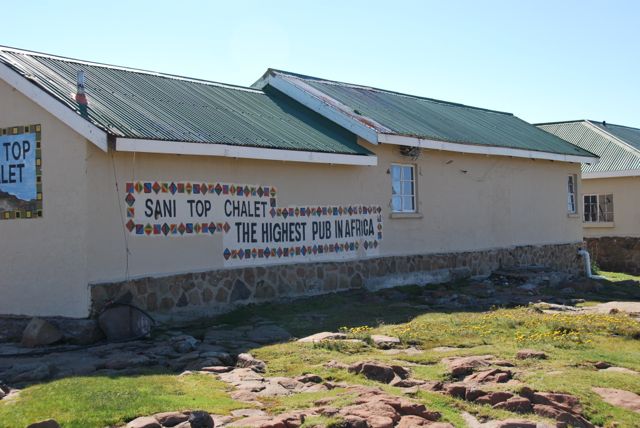 The rest of the day was spent driving through some truly breathtaking scenery. Lesotho is known as the “Mountain Kingdom” and mountainous it is with most of the country over 2500M and boasting impressive mountains. The 4x4 track to Mokhotlong was hard on Tin Can and driver though with steep and rough patches and a million potholes in the more level areas. Late afternoon saw us looking for a place to camp. The weather was clouding over and getting quite cold and what did we come across but a sign that read Maloraneng Lodge & Camping – only 10kms down the valley! 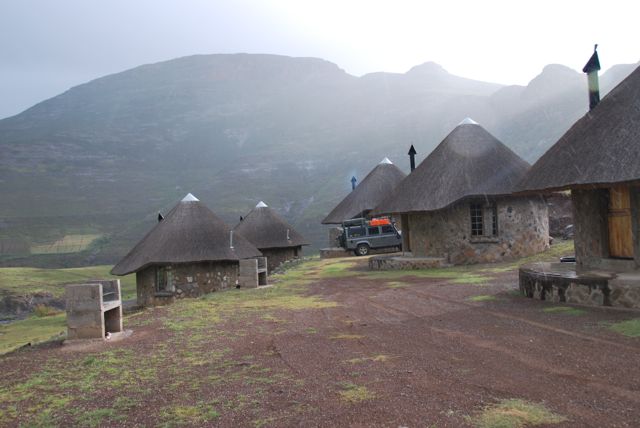 The picture on the sign looked good and, well, 10kms couldn’t be too hard after just completing some 150kms? Wrong! After the first 4kms of reasonable track past a diamond mine called Letseng-la Terae Diamond Mine (who it turned out had improved their part of the track), it deteriorated into stuff that made Tin Can groan and Marianne’s hair turn even greyer. But we were halfway there, late in the day, and rather too committed to turn back! 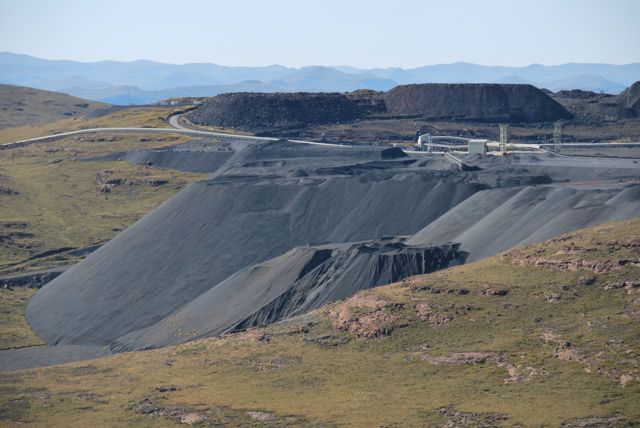 Hill Descent Control in Low 1st over football size rocks down a 20% incline was working overtime! An hour later saw us pull into Maloraneng, which looked quite inviting with some newish looking bungalows but rather deserted. A small Basotho hut settlement lay nearby. A couple of curious locals waved. It was getting cold and drizzling slightly and thoughts of putting up the rooftop tent were fading – and we were tired….. Not to worry – a very friendly lady called Claudia, who spoke quite good English, came up to say the Lodge was owned by the local community under the auspices of Lesotho Tourism and what did we want to do? Forget the camping and stay in one of the bungalows for R450 (USD$65) seemed an excellent idea? A fire was soon got going and a meal prepared. The bungalow was most comfortable although all lighting and hot water was gas and kerosene and we slept the sleep of the exhausted after only briefly thinking of   Tin Can having to climb up that same 10km track in the morning. 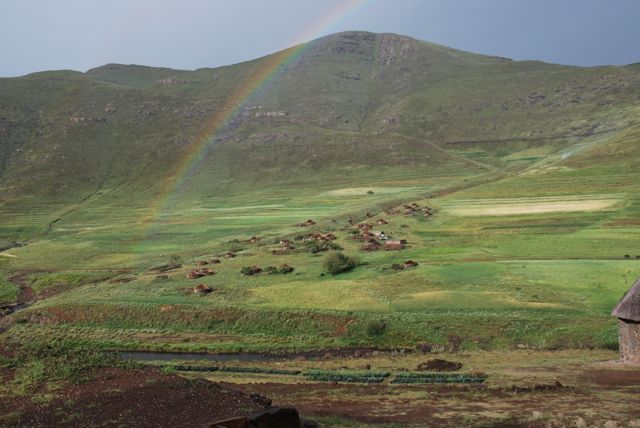 The next morning dawned bright and sunny and the views from the bungalow were stunning. We walked into the nearby village and gave away some pencils and little koala bears to some kids and was offered some mielie (corn) cobs to eat in exchange by the parents. We were quite sad to leave a brilliant spot with friendly people but the climb out beckoned! Suffice it to say that it took us an hour to climb the 10kms and 800m vertical back to the main road and everything short of the ARB Air lockers was used but  Tin Can get there without a hitch. I always worry about breaking something in a very remote area and causing untold dramas when attempting tracks like that though. Keeping Tin Can going is a paramount consideration! Memories of the rest of Lesotho are mainly of fantastic scenery reminiscent of the Snowy Mountains in Australia, dodging 50,000 potholes on the main “road” and a Botha-Bothe police roadblock #3 and the following conversation with a very polite Lesotho cop: “Hello, why did you not stop at the stop sign back there at the start of the roadblock?” “Because I could see you guys and rolled forward a little to let you talk to me.” “But I could arrest you for not stopping at the sign.” “Arrest me!” “Where you from?” “Australia” “Is that an island? Where is it?” “Yep, it’s a big island. Somewhere near China” “Where are you going?” (Long conversation ensues about our planned trip to Egypt.) “Auww! Too far! Better get going then- but next time I arrest you if you not stop”. “Phew! OK, So sorry!” After 200kms of grappling with Lesotho’s roads, the decision that night to give Tin can a break and cross back into South Africa and its generally excellent roads at Caledonspoort Border Post was easy. But don’t let the roads put you off – Lesotho is well worth a visit.

Beware the South African “yobbo” on your 4x4 trip

Two days of uneventful driving through the Free State has seen us arrive in Kimberley and viewing the “Big Hole” and diamond mine which in 1886 initiated the mighty De Beers Diamonds Ltd and made the men who formed the company like Cecil John Rhodes (Rhodes scholarships) and Barmy Barnato billionaires.  Many Aussie Diggers also tried to make their fortunes on the Kimberley fields. The only small hitch on the trip was camping in Ladybrand next to 3 young guys ( 2 whites and an African) travelling in a clapped out VW City with  green mag  wheels, low profile tyres and “go fast” stripes who proceeded  to get blind drunk and make a hell of a noise until 3.00a m.!  They very nearly got a load of my pepper spray at that point. The international equivalent of the Aussie Yobbo is alive and well in all continents, we are pleased to notice. Namibia is getting closer and much anticipated. The next week or so will see us in Kgalagadi Transfrontier Park and then on to the Kalahari and Namibia. Internet connection is likely to get more uncertain and these posts less regular. *sad face.

If you want to go on your own adventure through Africa, you might want to have a look at 4x4 hire to find the best vehicle for your adventure.

Exploring The Mountain Kingdom in Lesotho on a 4x4 track After hearing much about the Sani Pass which winds its way 2900 meters up the Drakensberg mountains into Lesotho and is rated one of South Africa’s premier 4 wheel drive challenges, we had always thought we had to give it a go with our equipped […]

Exploring The Mountain Kingdom in Lesotho on a 4x4 track After hearing much about the Sani Pass which winds its way 2900 meters up the Drakensberg mountains into Lesotho and is rated one of South Africa’s premier 4 wheel drive challenges, we had always thought we had to give it a go with our equipped […]

For many the Richtersveld is the |Ais|Ais Transfrontier Park, but it is actually much more than that. The Richterveld stretches along the Orange River and ends in Pella. It is every hardcore 4x4er's dream as sheer mountain desert and dramatic landscape awaits.