Cape Town Water Crisis: What You Need to Know

In 2018 there was massive panic in Cape Town because of a water shortage caused by a drought. The drought was caused by 3 consecutive wet seasons which did not produce enough rainfall from 2015 to 2017, resulting in low dam water levels as low as 22%.  The local government had to devise a water-saving campaign and implement water restrictions to discourage people from excessive water use. Please note that water was still available, it’s just that responsible water use was stressed in order to prevent Western Cape dams from drying up.

How is the Cape Town water situation?

Come 2019, the Western Cape has received enough rainfall to restore dam levels to about 80% capacity. The highest they have been in the past 4 years. There were still water restrictions and tariffs to prevent abuse and water conservation is still being promoted in restaurants and by the local government.

The City of Cape Town implemented water restrictions in 2018 to control the amount of water being used per day so that Cape Town would not reach a point where there was no water. By the end of 2018 they were dropped from level 5 to level 3 water restrictions which meant that each person was limited to 105 litres of water per day, up from 70 litres per day under level 5 restrictions.

You can check dam levels in areas supplying Cape Town on the Cape Town government site. As of 18 December 2019 the dam levels are at 78%.

Unlike the rest of South Africa, which has heavy rainfall in summer, the Cape Town rain season is winter. Rainfall data in areas surrounding Cape Town shows that there has been more rainfall in the 2018 and 2019 wet seasons. 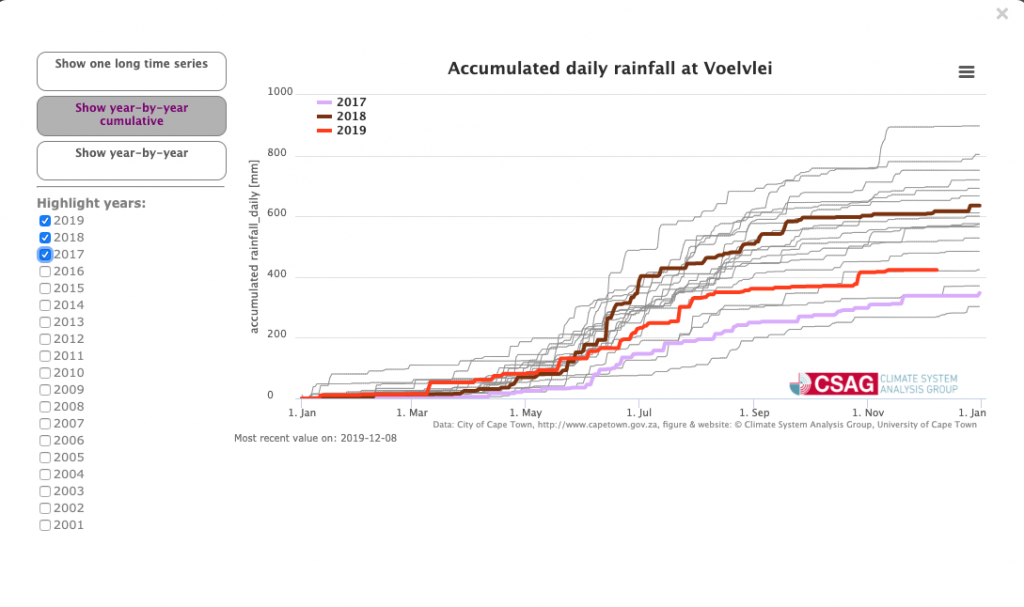 What has changed since the 2018 Cape Town  water crisis?

What travellers should know about Cape Town’s water crisis?

The water crisis is over with the dams at around 80%, therefore visitors need not worry. In addition to this visitors account for a small percentage of the population therefore their water usage does not have a great impact, but do be conscious of water usage and practice water-conserving behaviour.

The water crisis did not affect Cape Towns standing as the city was voted the best city in the world for the 7th year running by more than 39000 readers of The Telegraph. So if you want to book a trip to the Mother City, do so, so you can experience Cape Town and the rest of the rainbow nation for yourself.

Be sure to hire a car for the duration of your stay in Cape Town. You can pick it up from the Cape Town International Airport as soon as you land.

Land Cruiser vs Land Rover - which is the best 4x4?

These Aussies went a bit crazy with a Toyota Land Cruiser 4x4... Landy-enthusiasts would argue that you can do about the same (and more!) with a Land Rover. Are you in love with anything SUV? On which side of the Land-Cruiser-vs-Land-Rover-bar are you?

How to Spend the Perfect Weekend in Cape Town

2018 Cape Town Water Shortage In 2018 there was massive panic in Cape Town because of a water shortage caused by a drought. The drought was caused by 3 consecutive wet seasons which did not produce enough rainfall from 2015 to 2017, resulting in low dam water levels as low as 22%.  The local government […]

Distance from Johannesburg to Cape town

Roadtrips are on the rise and there are many possible routes to take in South Africa that would take your breath away in the beauty and offerings the country puts before us, but the most notable of those is the Johannesburg to Cape Town trip. You have multiple options to stop and stay and to go off the beaten path but the most used and easiest is the N1 straight down to Cape Town.