Botswana is quite possibly the most authentic of all the game-viewing destinations in Africa – and quite probably, the world. Where a safari to other destinations can often appear carefully curated, a visit to Botswana will leave you with that pioneering feeling, as if you were the first to discover this spectacular wilderness. Add a reliable and well appointed 4×4 safari vehicle to the mix and you’re in for some life-changing experiences.

During our 12-days on safari in Botswana, we traversed the country from South to North, from desert to lush wetlands. We saw some of the most memorable “on safari” scenes of our lives. These are just 12 of our favourite experiences from the adventure, there are plenty more to be had. 4×4 rental Botswana is your best bet of achieving this.

1.  A lion, taking a stroll past our vehicle, twice!

You could comb the savanna for days and not come across the ‘King’, but in Botswana, we had not one, not two, but five separate sightings of good old Simba! Twice, he walked straight past our vehicle without a care in the world, so close you could almost reach out and touch him. If you value your fingers (or arm) though, don’t do that!

It’s not all doom and gloom if you’re an elephant in Botswana though and one of the highlights of the trip was the charge of a boisterous young bull, ousting a rival across the river. In Moremi Game Reserve in the Okavango Delta, he leapt in front of our boat into a deep river and snorkelled his way across to charge his rival, thrashing and trumpeting as he went. It doesn’t get more ‘in your face’ than this!

3. Waking up to an early family peering through the window

There’s nothing that beats waking from an afternoon nap in the back of the car to these inquisitive elephant faces peering in at you! You kinda have to rub your eyes a few times and pinch yourself to be convinced you’re not dreaming. That’s just how up-close-and-personal game viewing in this country is. 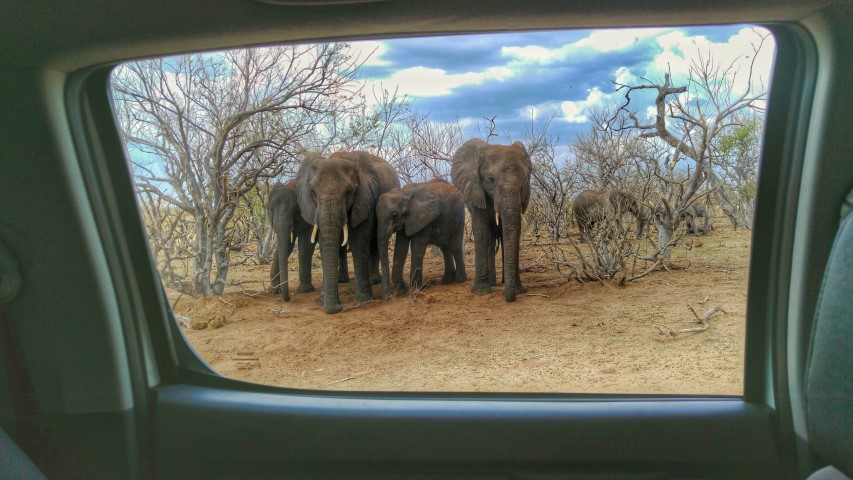 Well, speaking of Attenborough moments, one from his series entitled “Africa” unfolded right in front of our eyes. While driving in Chobe National Park along the banks of the eponymous river, we witnessed the slow and somewhat violent dance of two male giraffes as they squared off against each other. One can’t help but wince as repeated powerful, calculated blows are delivered from each animal’s head to the body of their opponent. Painful as it may be to watch, it’s what’s happening daily in the rich wilderness that is Botswana.

5. A leopard in our camp

Deep in a former hunting concession (hunting is now banned in Botswana), we spent the night at what used to be the concession’s lodge, known as Tuskers. Waiting to be transformed into a luxury camp, this spot has a slightly eerie atmosphere to it, aided by a pair of green eyes peering at us all night from the bushes and a set of large, fresh feline tracks in the sand. It was only at about 10 pm as we were heading off to bed that a silent, slinking figure darted past, a metre from the camp table. All torches swung in its direction, it was a leopard cub on the prowl for some scraps. Nothing makes your hair stand on end in the same way as seeing one of Africa’s most elusive creatures, an arm’s length from you in the bushveld night. 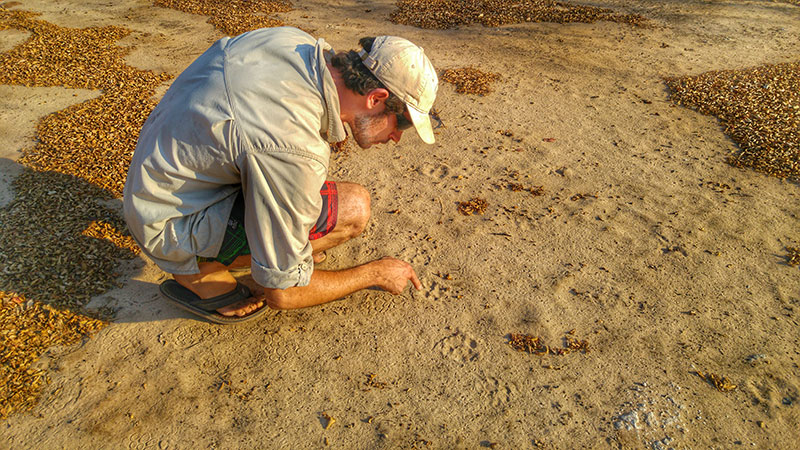 6. Dining gourmet, in the middle of nowhere

One of the great things about a DIY safari in your own 4×4 vehicle is that you pretty much call the shots on the menu, and there’s absolutely no need to dine poorly. Kitted with fridges, padded drawers, cookers and an array of crockery, the comforts of home travel with you. You can sip on an ice-cold gin & tonic, watching the orange, setting sun over the treeline, listening to the bray of a distant herd of zebra as you roast stuffed mushrooms on the fire and your fillet steak sizzles over the coals. Bliss.

7. Sunset over the Okavango Delta

Yes, the sun sets everywhere in the world, but few have it better than Botswana. The best spot in the country? Arguably in the Okavango Delta. Deep in Moremi Game Reserve, sitting peacefully on a boat, complete with fish eagles calling from the trees and hippos wallowing in the shallows, we watched the sun sink to the horizon, turning all colours of the embers of a campfire as we sipped our St Louis in silence. You can’t have a worry in the world left after something like that!

One of the highlights of this country is camping on historic Kubu Island. Rising up suddenly from the desolation of the Makgadikgadi Pans, itself an area the size of Portugal, this granite outcrop, peppered with primaeval-looking baobabs is visible for miles around. Climb the boulders at sunset, drink in hand and watch the light disappear between the branches of these mammoth trees. Once home to an obscure and ancient civilisation who built stone walls still visible on the island, you might just be sitting in the exact spot where a mysterious king once surveyed his lands in the light of the setting sun.

It can be a daunting thing if you’ve never done it before, driving a 4×4. Surprisingly, it’s not as difficult as you think. You’ll be shown how when you pick the vehicle up and after your first few sandy or muddy experiences, you’ll be navigating the back roads of the bush like you’ve been doing it your whole life. It’s a skill which comes in super handy at getting to those off-the-beaten-track type places, away from the droves of game-lodge safari vehicles. We wouldn’t have captured half the amazing memories we did, were it not for the independence our vehicles offered.

10. The arrival of the first rains

Botswana, for much of the year and over much of its area is dry, parched land. But come November when the temperatures can soar into the 40s, the first rains arrive to break the heat. It’s as if the whole wilderness breathes a collective sigh of relief. Trees spring back to life, long dry hollows fill with water and hippos and warthogs take a celebratory wallow. It’s also when driving can be at its most fun, a fact the mud-splattered sides of our vehicles attested to!

Botswana is nothing if not friendly and we came across some incredible people on our trip. From smiling border guards, to camp rangers who shared a bite to eat around the campfire, to an incredible woman, Lorato starting her own travel agency in a roadside shop after returning from working in Canada, to a bunch of mesmerised village kids, seeing their photo for the first time; this land of sunshine and smiles could melt the coldest hearts.

12. A kite stealing my chop

Moremi Game Reserve is known for its birdlife and while the holy grail for birders may be the Pel’s Fishing Owl, the ubiquitous Southern African bird of prey, the Yellow Billed Kite probably stole the show for us (or at least our dinner). While thawing some lamb chops in the afternoon sun, circling overhead was a hungry kite, waiting for an opportunity to snatch some dinner. Luckily our cameras were pointed in the right direction at exactly the right moment because in a flash he dove down from the sky and snatched a piece of meat. Blink, and you’ll miss it!